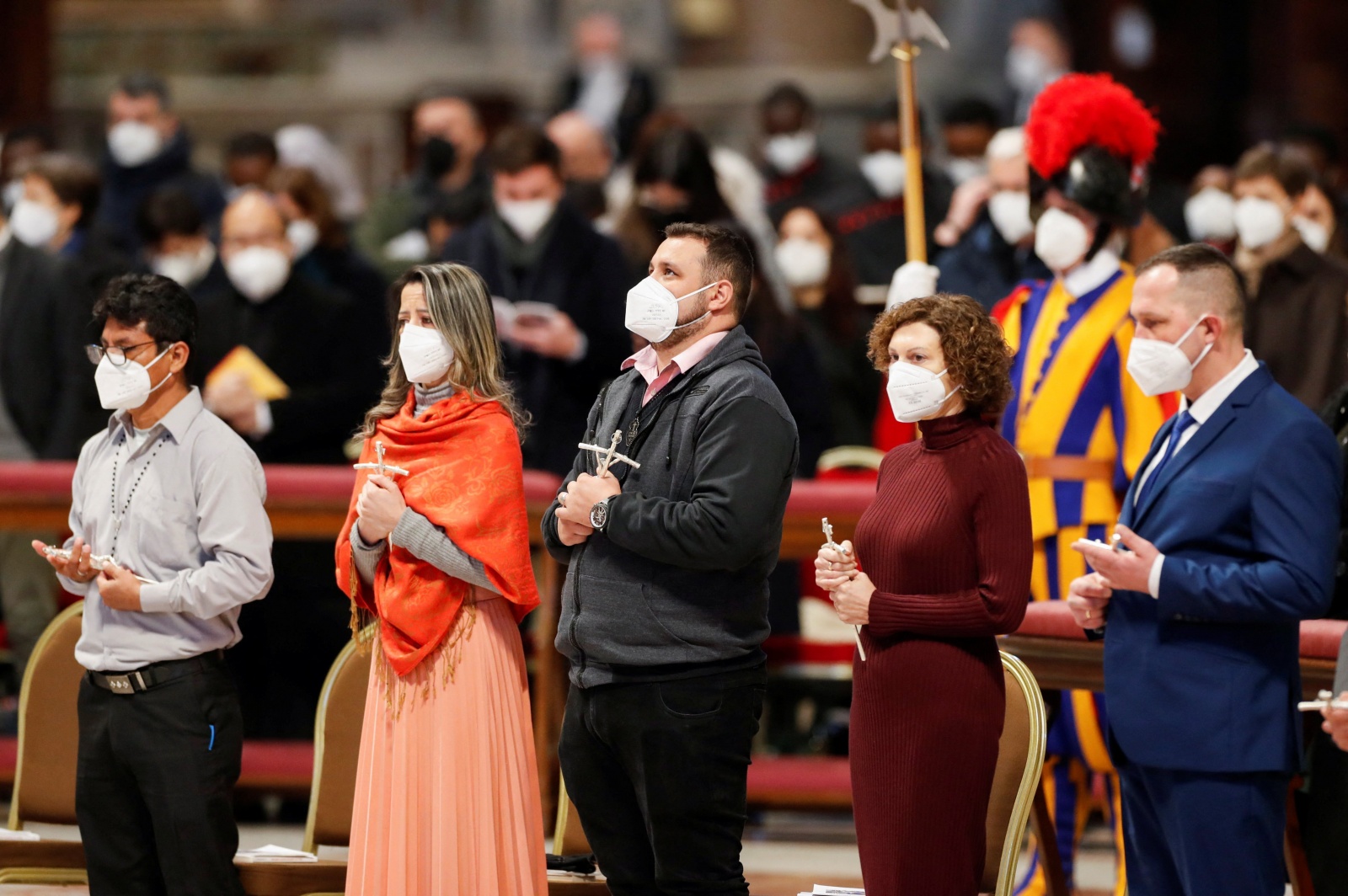 Pope Francis, in his post-synodal exhortation Querida Amazonia, praises the women for their generous service, but then uses the unlikely success of such work as an argument to contain their aspirations. Like Pope Benedict, Pope Francis did not mention instituted ministries in his exhortation. Curiously, he instead offered various caveats and warnings that reinforce the all-male priesthood (the ordination of women to the priesthood was not advocated by the Synod, but it seems to come up, like a bad conscience, every time that church leaders consider any proposals to expand women’s access to ministry in the church). Yet Francis raised the question of Office (publicly recognized duties) towards women:

In a Synodal Church, women who in fact have a central role to play in Amazonian communities should have access to positions, including ecclesial services, which do not involve Holy Orders and which can better signify the role that is theirs. It should be noted here that these services involve stability, public recognition, and a commission from the bishop. It would also allow women to have a real and effective impact on the organization, the most important decisions and the direction of communities, while continuing to do so in a way that reflects their femininity. (AQ 103)

This echoes an earlier statement he made in the encyclical The Joy of the Gospelwhich proposed a greater role for women in decision-making in the Church.

It turns out that “stability, public recognition and a commission from the bishop” are precisely the conditions that were met when Pope Francis determined in 2021 that it would be both permissible and “expedient” to modify canon 230 § 1 to include women in the instituted ministries of lector and acolyte. This dissolved the reserve of ministeriam quaedam and allowed women a place in instituted ministries, just as the Amazon Synod had requested. He opened this perspective not only for the Amazon region but for the universal Church.

Francis followed this decision with another motu proprio establishing the ministry of catechist as an instituted ministry. This roughly corresponds to the Synod’s request to establish an official designation for “women’s community leadership” (although it is also open to men) because the catechist is the de facto community leader in mission territories, and may be the sole official representative of the church.

Now that this precedent has been set, however, new questions arise for which there are no easy or obvious answers. What is the horizon of our expectations? How deep is our own commitment to “sincerity” in exercising these ministries?

Let’s be frank here: the modes and models of the minor orders that we have inherited from the past have not been substantially revised by the reforms of Paul VI. Yes, some minor orders have been canceled and others have been given new names, but under the BOM and sorting little has changed. The Church’s experience with instituted ministries has been limited almost entirely to men who are about to be ordained, when most of the work is done by someone else. This model has never been thoroughly reviewed.

A look at what remains in the books regarding the ministries instituted before Francis’ intervention shows a distinctly clerical bias. Norms are strict on order and privilege (if an instituted minister is present, the uninstituted minister must yield; instituted must sit in sanctuary, etc.), but silent on questions of collaboration and reciprocity . Francis’ letter to Cardinal Luis Ladaria, prefect of the Congregation for the Doctrine of the Faith, envisions instead a vibrant experience of reciprocal collaboration between the baptismal priesthood and the ministerial priesthood that plays out in the exercise of these instituted ministries. Francis presented the instituted ministries as an important opportunity for women to enter into decision-making in the ecclesial community, to advance the work of evangelization, to inspire the laity, to affect the life of parishes and to shape their mission. Yet how it will all turn out remains unclear.

The rhetoric that Francis uses to describe the foundations of such ministries (“the royal priesthood of Baptism”) is decidedly Christological, but our conception of what is happening continues to gravitate towards the simple functional. This is no doubt because lay liturgical ministries have developed in a way that reflects their ad hoc status. At present, they are an extremely limited “plug and play” reality in our parishes. They assume no lateral relationship (catechists in the United States have peer organizations, but there is nothing comparable for readers or acolytes). They do not carry within them any notion of public service. Nor do they lead to structured participation in the councils and decision-making of a local community. They enjoy no mandate from the bishop, and most of those who exercise them have received only minimal liturgical training, training, or education. All of this must change, if instituted ministries are to become a “real thing” in the Church and not just a facade.

We need more reflection on the intertwined but different topics of Christian ministry, office and participation in the threefold mission of Christ. munera (priest, prophet and king) in the Church. However, there is no guarantee that this will happen. The prolonged period in which our horizon of expectations has been shortened to a level of basic functionality and “helping the Father” could very well lead to a failure of theological imagination and courage as we face this new moment in history. The blank stares elicited by the news (“Don’t women already do these things?”) show that, for many of us, we have come to this moment ill-prepared.

It is important not to pour the new wine of women’s participation into the old wineskins of a failed clericalist vision. In the clerical model, when an office is conferred, the ministry is presumed to follow automatically. But if there’s anything the development of lay church ministry has taught us over the past few decades, it’s that real ministry doesn’t work that way. It is a sharing of gifts in response to needs. There is genuine reciprocity between the service of those who serve and the needs of those who are served. Priests and pastors know this from experience, as do lay people, but our system has been lagging behind for a long time. Being called a “reader” does not give anyone the gift of reading the scriptures intelligently, passionately, or well. First, the gift must be discerned. Then the need must be recognized. (The proclamation of the Word in the liturgy is important; much depends on this.) Only then does public office have meaning. Questions of precedence and order are secondary to questions of charisma and service. The credibility of the ministry of the Church demands that we do things right.

The opening of instituted ministries to women will also initiate, truly for the first time, a settling of accounts with an ecclesiology that divides the Church too simply into clergy and laity. A multiplicity of different ministries, each formally recognized and empowered by the bishop, and all ordained to communion, are being established. It complicates things, but it’s a wonderful complexity. We are invited to new ways of working with one another in the great work of the Church. We cannot go into this with our eyes closed, as if we were simply putting a new label on an already existing set of roles and relationships. It’s a new time. To use the expression of the eminent scholar Cesare Giraudo, SJ, who wrote on the ministries instituted in La Civilta Cattolicathe inclusion of women in these ministries is “an important step and a point of no return”.