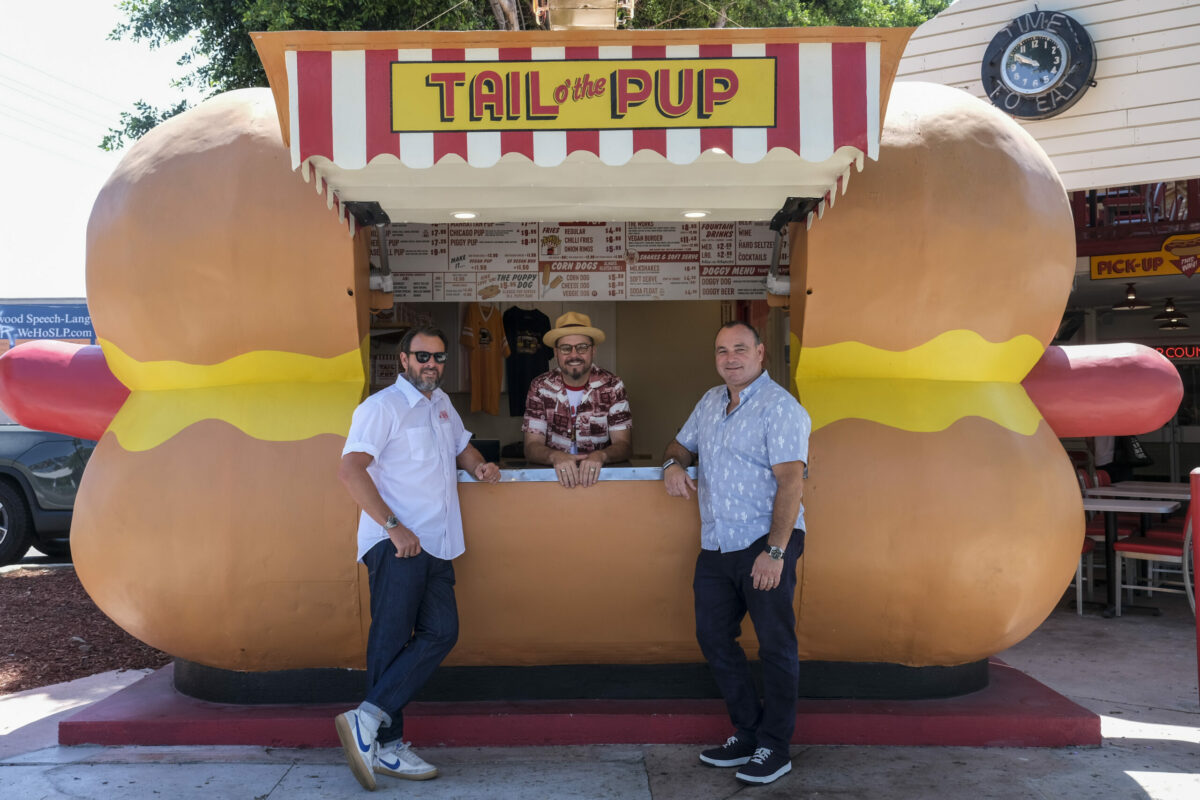 Palms-based 1933 Group is behind some of Los Angeles’ most iconic historic renovations.
More recently, the company opened Tail o’ the Pup, a giant hot dog stand that dates back to the 1940s in West Hollywood.

The original Tail o’ the Pup closed in 2005. Bobby Green, who founded 1933 Group with Dimitri Komarov and Dmitry Liberman, said he was contacted by a friend of his who ran a museum to which the booth was donated. His friend put Green in touch with the owners of Tail o’ the Pup, who decided to sell the giant hot dog and the name to 1933 Group instead.

“Even though we’ve never done fast food or fast casual, we didn’t think it was too different from what we normally do,” Green said. Most of the group’s other projects have focused on bars and hospitality.

Green said finding a good location was the “key factor” in reviving the restaurant.
Due to the pandemic, he said, more locations became available and Tail o’ the Pup was able to find a place in the heart of West Hollywood.

1933 Group has carried out nearly ten restorations since its creation in 1998 with the aim of opening a bar.
Green, who previously owned a cafe, said he was still interested in owning a bar. He bonded with Komarov and Liberman, and thus began 1933 Group’s first project: Bigfoot Lodge in Atwater Village.

The company quickly grew by opening more locations.
“We were on a roll,” Green said. “We opened a new establishment every year and a half and at the time it was strictly bars.”

Green said all of the band’s initial ventures were “vintage-inspired” places. Soon after, the company began to work more on true vintage restorations.
“It wasn’t until we had the opportunity with Idle Hour in North Hollywood that we had the chance to restore a truly vintage venue rather than recreate a vintage venue,” Green said. The group spent $2 million to renovate the property, best known for its giant barrel exterior.

Other restoration projects followed, such as the $2.5 million renovation of Highland Park Bowl, a 1920s bowling alley that Green said was the oldest bowling alley in Los Angeles.
“Restoration costs double or triple what it costs to build something new,” Green said.

“There is great satisfaction in doing this and great benefits, but it also comes at a cost. Renovation costs more than new construction, but for us it does not matter. The passion is greater than the cost burden and we try to find ways to make it worth it in the end.
Generally speaking, Green said he likes to “stick to what I know,” which is why he hasn’t done any theater or department store renovations.

“The cinemas we refused. We would have to completely learn how to run a theater and book events. We stick to hospitality and try not to stray too far from that,” he said.
For now, Green said the company has no plans to start a new project in the short term, but rather is “tunneling through Tail o’ the Pup and perfecting it.”

“At the moment we don’t have a project on the horizon, which is absolutely fine,” he said. “We still have to lick our wounds and keep the places we have and build them and perfect them and get the business back to what it was before we started leveraging ourselves and taking on more projects.”