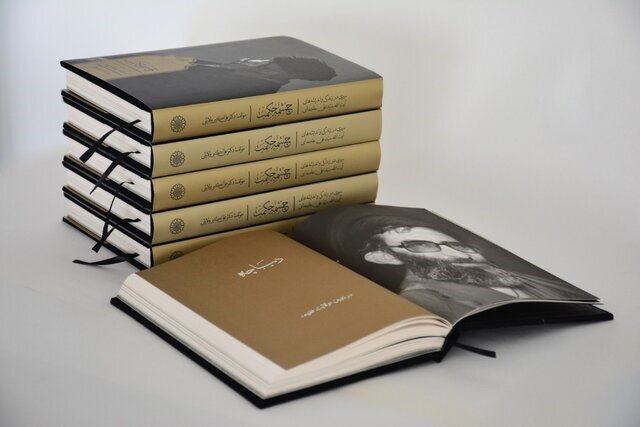 TEHRAN – The Center for the Great Islamic Encyclopedia has published an entry on the Leader of the Islamic Revolution, Ayatollah Seyyed Ali Khamenei, in a separate book.

Titled “Spring of Knowledge: A Survey of Life Story and Thoughts of Supreme Leader Ayatollah Seyyed Ali Khamenei”, the book is written by Ali-Akbar Velayati, the Leader’s senior adviser.

Containing 208 pages, the book was written in three chapters, the first of which gives a biography of the chief and provides an introduction to his ancestors.

The chief’s scientific and cultural background and his beginnings in political and social life are also examined in this chapter.

The second chapter covers the activities of Ayatollah Khamenei during the first decade after the victory of the Islamic Revolution. His work in the Revolutionary Council and the Islamic Republican Party, and his role as leader of the Friday prayers are also discussed in this section.

The leader’s positions on various issues as a member of the Iranian Parliament, his role as a commander during the 1980-1988 Iran-Iraq War, his struggles against liberals and former Iranian President Abolhassan Bani-Sadr, and his life as chair are illustrated in this chapter.

The third chapter provides an in-depth insight into the life of Ayatollah Khamenei after he was declared leader of the Islamic Revolution following the death of the revolution’s founder, Imam Khomeini.

The role of the leader in formulating the foreign and domestic policy of the country, as well as in military, defense and legal affairs is studied in this part.

In a preface to the book, Velayati said the writing for the entry on Ayatollah Khamenei was proposed by Seyyed Kazem Musavi Bojnurdi, director of the Center for the Great Islamic Encyclopedia.

Velayati agreed to contribute to the encyclopedia after gaining the chief’s approval.

He went on to say that the entry, which was published in the 21st book of the encyclopedia, was warmly received by the general public.

Subsequently, Musavi Bojnurdi announced the Center for the Great Islamic Encyclopedia’s plan to publish the entry in a separate book and asked Velayati to write a preface to the publication.

On the advice of his colleague, Velayati emphasized in the introduction the need for the velayat-e faqih system of governance in Shi’ism during the absence of Imam Mahdi (as).

Velayati is the author of the 15-volume collection “Ancient and Contemporary History of Iran”.

The latest book in the collection was published in 2017 under the subtitle “Iran during the Leadership of Hazrat Ayatollah Khamenei”.

Photo: Copies of the book “Spring of Knowledge: A Survey of Life Story and Thoughts of Supreme Leader Ayatollah Seyyed Ali Khamenei” by Ali-Akbar Velayati.

McCaughey: The racism of the Biden administration | Opinion