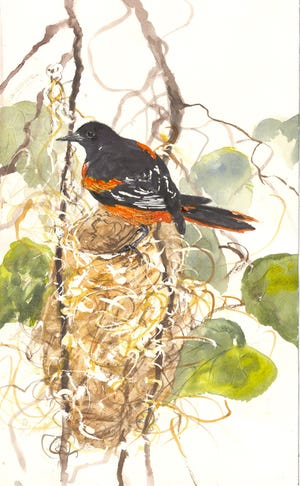 Ornithologists have speculated that birds started building nests when they were unable to locate natural cavities. Of the 470 perching birds (passerines) in North America, about 25% use holes or build domed structures, while the rest have open nests built from scratch. These open nests vary greatly in adaptation to the immediate environment as well as the needs of individual species.

An illustrated book such as Hal H. Harrison’s “A Field Guide to Bird’s Nests” (1975) will help you identify many nests that you can locate on or near your property.

Do not disturb nesting birds. Observe them from a distance using binoculars or a telescope.

Birds:Go with a birding group to learn species and vocalizations

If you spot a nest in a shrub or tree fork or on a horizontal branch lined with mud, chances are it was built by a female robin. She shaped the mud to fit her body while still wet. During the nest building phase, a female robin often builds several nests side by side, although she normally lays eggs in only one of them.

Given that the red-eyed vireo is one of the most common breeding birds in eastern deciduous forests, it is not surprising that its nests are among the most frequently encountered. Look for a deep, pocket-like structure built into the horizontal fork of a slender tree branch about 10 to 20 feet above the ground.

A red-eyed vireo nest demonstrates the close relationship between birds and the habitats in which they choose to breed. They are constructed from various grasses, strips of birch bark and vine tendrils.

It is often located directly under an overhanging leaf that serves as a roof to protect against rain and camouflage against predators. The outside of the nest is both “camouflaged” and “decorated” with wisps of old man’s beard (“usnea”, a lichen that resembles Spanish moss) and various other lichen species.

Few would deny that birds camouflage their nests with local materials so that they blend in with the immediate environment to avoid predators. I also feel like birds have an aesthetic sense that leads them to decoratively build and camouflage. And it is, after all, the most cleverly designed structure that blends best into the landscape.

The most common question I get regarding bird nests is “Where do hummingbirds build their nests?” Well, they build them about 10 to 20 feet above the ground on a twig or small branch that is leaning downward. Just over an inch wide and 1.5 inches tall, they are difficult to spot due to their size and the intricate decorative camouflage of greenish-gray lichens applied to the outside of the nest. Seen from the ground, a ruby-throated hummingbird’s nest looks exactly like a mossy knot on a branch.

If there is a finer nest in North America than the one built by the female Baltimore oriole, I have yet to see it. As described by Donald and Lillian Stokes in their “Guide to Bird Behavior” (vol. II, 1983), it is almost entirely the work of the female. The task assigned to the male is to find a nearby perch from which he can sing while she works. Male and female Baltimore orioles look quite different. (Elizabeth’s illustration shows a man inspecting his partner’s work.)

Hanging from the end of an overhanging branch, it takes 5 to 8 days to build the nest. Using long fibers to create a suspended frame, she then lines the inside of the structure with soft materials like feathers, grasses and wool.

George Ellison is an award-winning naturalist and writer. His wife, Elizabeth Ellison, is a painter and illustrator who owns a gallery studio at 155 Main St., Bryson City. Contact them at info@georgeellison.com or info@elizabethellisongallery.com or write to 3880 Balltown Road, Bryson City, NC 28713.

Publication of an intuition encouragement book and a spiritual mindfulness motivation…