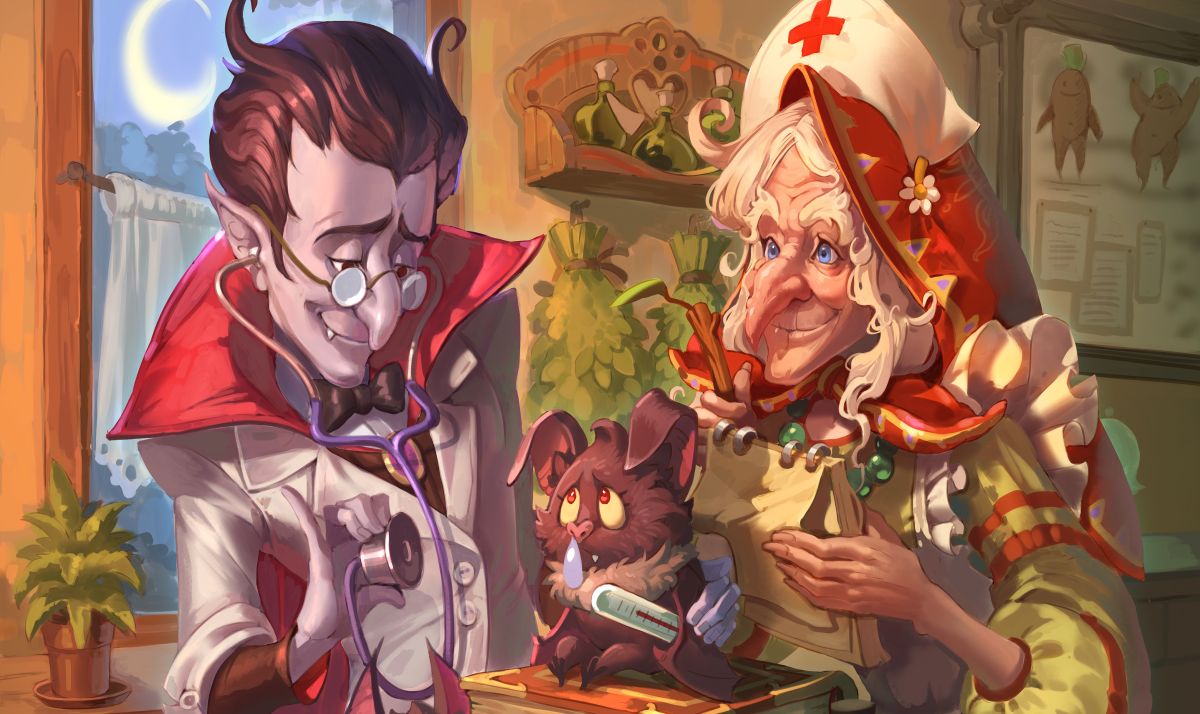 Throw folk tale characters into highly seamless automatic card combat inspired by Hearthstone Battlegrounds and you pretty much know exactly what storybook brawl is. It’s a slightly simpler game, with fewer interactions and an emphasis on long-term strategies rather than short-term tactical combos. At the start of each round, you draw a hero from folk stories, fairy tales, and myths: someone like Merlin, the Pied Piper, Gepetto, or Loki. Each hero has a unique power, some strong earlier and some later in the fight, others completely changing the way you play and strategize.

The fairy tale theme means a charming art suite with lots of whimsical and cheerful pieces. I love the dwarf set, with their leader, the vampiric evil princess Snow Wight. There are in-jokes and puns on both pop culture and source material, all well suited to a genre of game that by its nature can’t take itself too seriously.

It’s good that the art welcomes you, because the game mechanics absolutely do not. More than most auto-fighters, success in Storybook Brawl hinges on understanding which characters can be part of which combos with which heroes.

Every turn you spend from a growing pool of gold – use it or lose it – to recruit one of a selection of creatures. You place your new minions in one of two rows: a front row with four spaces and a back row with three. They fight the opponent from left to right, front row to back. As with most auto battles, your creatures have abilities and combine with each other over time.

These two ranks are a very slight change from other games in the genre, but they have a big impact. Early in the game you can protect key pieces by placing them behind a meat shield, late game your combos can depend on position and order as much as what pieces you have on the board.

You can focus on supporting characters, giving bonuses to the characters in front of them, while giving your top tier characters all the buffs you can muster. Or you can stock up on flyers, who jump up and attack the back row, hoping to take out your opponent’s key support pieces. Many of the coolest choices are made when you combine parts. Do you want to keep two vampires, each with their own powerful on-kill effect, or do you want to strengthen into one big, bad vampire and free up some board space?

There are only seven slots on the board, and that seven-character limit is, as in Hearthstone Battlegrounds, perhaps the big defining feature of Storybook Brawl, forcing you to be precise in what you buy and when. Each character costs gold equal to its level, and you can only hold four characters in your hand as a supply. The economy is always tight, always constrained, and you can never quite buy exactly what you want, or even find it, sometimes. I’ve lost more than a few matches because my hero’s key combo pieces just never showed up.

Despite this, Storybook Brawl still has that advantage of the game combined with the strategy. Bad luck this time, maybe next time you’ll get those perfect pieces for a nifty combo.

When you combine three characters of the same type, they change to a better version, and you can also choose a treasure from three random choices. Treasure, like your creatures, is categorized into one of five levels (2-6) and matches the level of the minions you combined.

In addition to creatures, each draft includes a spell. It could be something like a bonus for your characters for one round, or a permanent bonus, or a reward if you win the next round.

If you keep track here, it’s an autobattler with random positioning and treasures. For all that Storybook Brawl resembles Hearthstone Battlegrounds, it’s also a lot like the ancestor of the Auto Chess genre. The large number of random elements causes games to vary wildly from game to game. Overlay a hero character on artifacts, both randomly drafted from a huge pool each playthrough, and the large pool of characters to buy, some of which combine well and some of which don’t. And don’t forget the spells. Storybook Brawls is a very, very cluttered game.

Maybe that’s his real problem. More than a derivative creature design or simple mechanics, Storybook Brawls feels blurry. Although it has the advantage of being a standalone game, it still struggles for a unique identity among the varied mechanics of what is still an unexplored game genre, and rather than focusing on one or two things as being the most interesting ones, he instead threw everything on the wall. They have the rest of Early Access to see what sticks.

Legend of Mana and the storybook charm of nonlinear RPGs