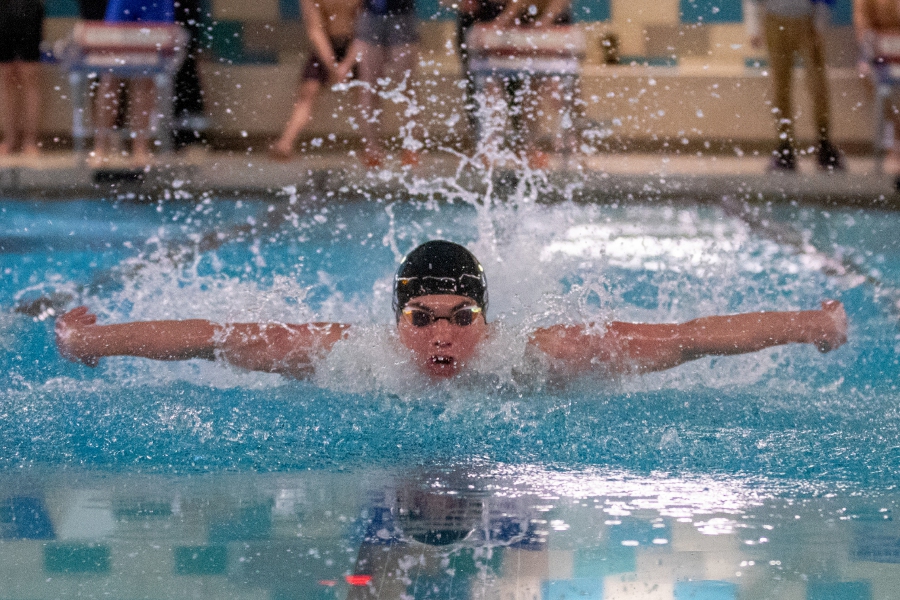 Southington, Meriden continued to rewrite their record books and storytelling seasons in the LL class finals

WEST HARTFORD — Wednesday afternoon’s Class LL state championship swim meet produced no regional state titles, but it did provide more highlights in what has been a great season in the pool for Southington and the Meriden Co-Op.

Southington manager Evan Tuttle said Wednesday was a historic day for Southington’s program, and the same could be said for Meriden. Records have been rewritten and several swimmers from both teams are on course to qualify for Saturday’s State Open at Cornerstone.

“We broke two relay records that had stood for nearly 30 years in the medley relay and the 400 freestyle relay,” Tuttle noted. “Landon Colby broke the IM record again and everyone in the lineup posted the times they needed. We like where we are in terms of advancing the guys to the Opens.

The team’s seventh place finish was also the highest in the LL class for Southington during Tuttle’s 12-year tenure as head coach.

“I couldn’t be happier and I’m looking forward to another opportunity to improve on Saturday at the Open,” Tuttle said.

Southington had several swimmers on the podium on Wednesday. Sophomore Peter Zalewski was fourth in the 500 freestyle in 4:47.93. He lost seven seconds off his previous best with this run.

The 200m medley team of Zalewski, Colby, Mathew Siwek and Matt Niro climbed to the podium by swimming to their top seed and placing fifth to open the competition. Their time of 1:40.14 is a new school record. The precedent existed since 1992.

The same group – Zalewski, Colby, Siwek and Niro – capped the competition with a sixth-place finish in the 400 freestyle relay. Their time of 3:17.04 in the event broke a Southington record from 1998.

Individually, Colby finished sixth in the 100 butterfly with a time of 52:02 and finished just off the podium in the 200 IM with the school record of 1:58.90 which placed him seventh. Chris Prus had the old brand, established in 2005.

Also for the Blue Knights on Wednesday, Niro was eighth in the 100 breaststroke in 54.79.

“We got great leadership from our upper classes,” Tuttle said. “Landon Colby is probably the model student-athlete in terms of work ethic and attitude, and it’s not hard for anyone to follow his example.”

On Monday, Southington put in two strong diving performances at the Class LL Championships held in Middletown. School record holder Alex Rosania was seventh at 429.65 and Nico Smith was 11th (365.80). The two will compete in the State Open on Thursday.

Southington was the CCC West regular season champion, going 5-0 in the division and 11-0 overall. The Blue Knights went on to win the CCC West Championship tie earlier this month at West Hartford.

In CCC South, Meriden is 8-4 in the regular season, including 4-2 in the division. At full strength for the Divisional Championship, Meriden won the CCC South meet earlier this month in Platt.

On Wednesday, the Silver City team was highlighted by a fifth-place finish by Sam Hurlburt in the 100 breaststroke in 1:01.76.

“We had 13 of the 18 boys qualified for this competition, plus two divers the other day,” Meriden Co-op coach Ed Heath said. “It’s a lot.”

Heath noted that at the LL class trials on Sunday night, the 200 medley relay broke the co-op record, Hurlburt broke his own Maloney and co-op breaststroke record and John Peralta broke the Maloney 500 freestyle record, the one that existed since 1993. .

The 200m medley team of Mehdi Moumen, Spencer Studley, Hurlburt and Peralta lowered their record further on Wednesday with a 1:43.10.

“Sam Hurlburt knows nothing but hard work,” Heath said. “To see him go from 1:03 to 1:00.67 is special. He’s going to the East next year on a full lap. He could go anywhere. He’s No. 2 in his class. Eastern will be a good choice and he still wants to swim.

Studley, Moumen, Joe Peralta and John Peralta finished ninth in the 400 freestyle relay clocking 3:25.81. This is also a new Co-op record. The team was five seconds faster than in practice.

Said Heath, “If you go by the win-loss record and the number of swimmers in the states, this is a highlight and the best men’s team we’ve had in a long, long time.”