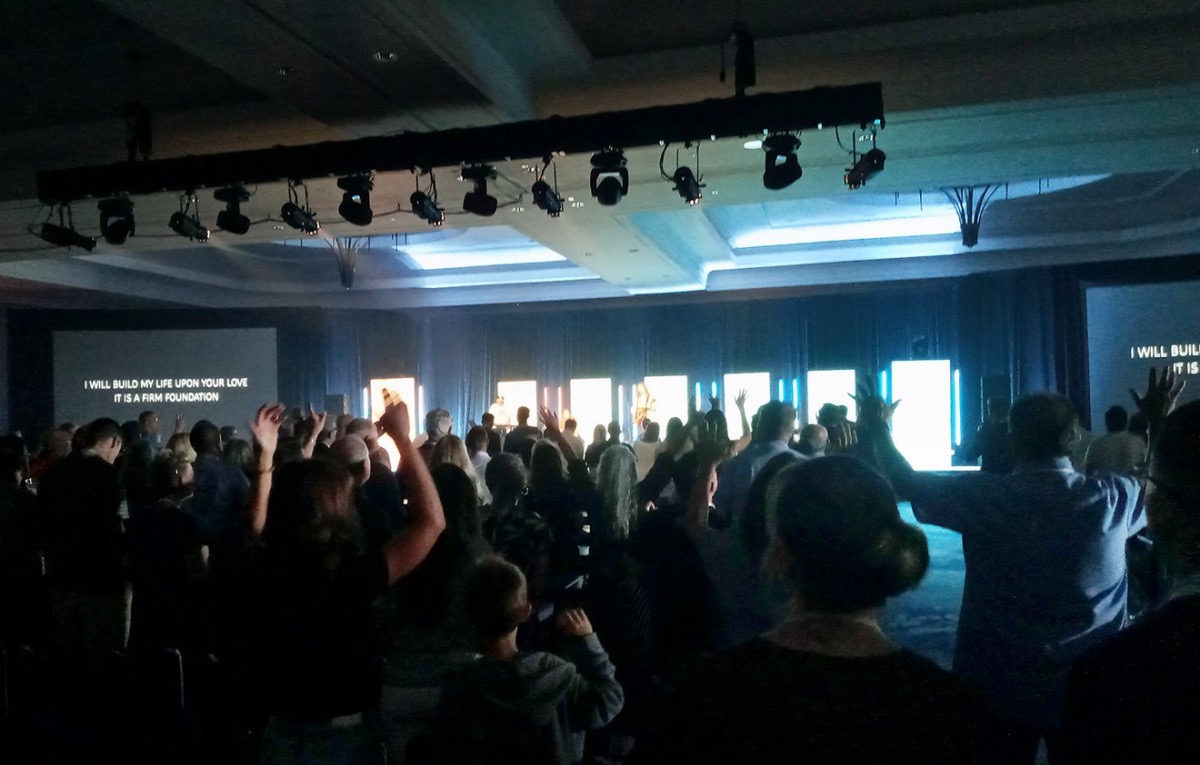 Phoenix pastor Caleb Campbell has a theory about the growing number of Americans being labeled as Christian nationalists.

Most would rather go to Cracker Barrel than storm the Capitol.

Participants sing along with the band at a Turning Point USA event earlier this year. PHOTO: Courtesy of Caleb Campbell

Many see themselves as good Christians who love their country. But somewhere along the way, they started to think that being a good American and being a Christian were one and the same thing.

“Their whole life has been a mixture of their American civil religion and their Christian religion,” said Campbell, pastor of Desert Springs Bible Church and a self-proclaimed missionary to Christian nationalists. 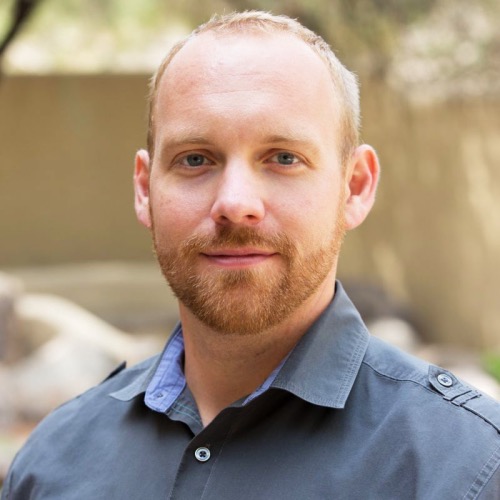 “Their whole life has been the mixture of their American civil religion and their Christian religion.”

To help fellow Christians distinguish more clearly between their faith and their identity as Americans, Campbell founded a group called Disarm Leviathan and has spent the past year reading Christian nationalist books and attending events like Turning Point USA’s monthly Freedom Night in America party, held at a megachurch in Phoenix.

He also signed up to teach a “biblical citizenship class” led by Patriot Academy, founded by Rick Green, a former Texas state legislator turned Christian “Constitution Coach.” The class mixes details about America’s founding and the Constitution with Bible verses and conservative politics.

Patriotism of God and country remains popular in the United States, according to a recent report from Pew Research. Nearly half of Americans (45%) think America should be a Christian country, including 78% white evangelicals and 62% black Protestants.

Although few people want the US government to adopt Christianity as the country’s official religion, according to Pew, many Americans worry that the religion will lose its influence in the culture. This fear, Campbell says, has led growing numbers of his co-religionists to adopt a more extreme form of patriotism between God and country, more focused on winning the culture war than chasing after Jesus.

Campbell expected many of the people in Christian nationalist circles he encountered to be angry political supporters. But instead, most were kind-hearted people who thought they were doing the right thing for God. 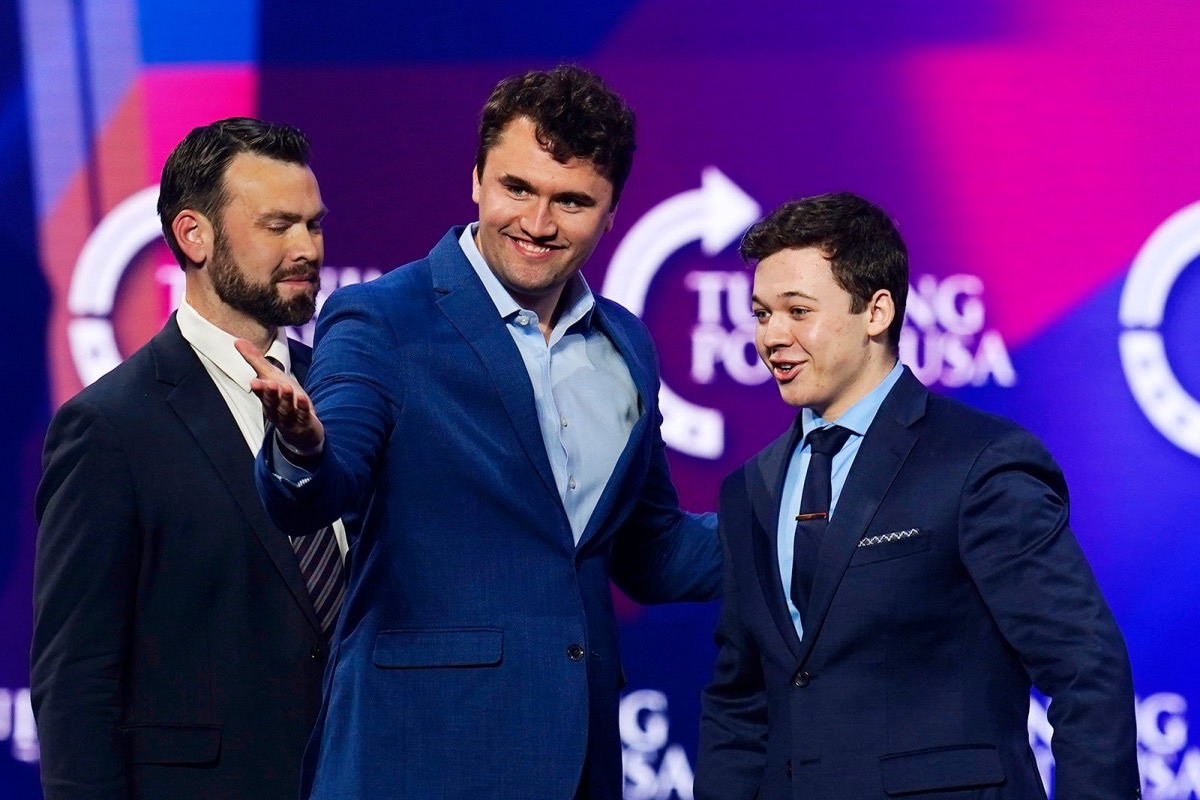 At the time, Campbell had focused on arguing with Christian nationalists, trying to convince them of their ideology – popularized by The politicians, pastors and online activists – is incompatible with the teachings of Jesus. But this approach did not work. He began to think of them as “Aunt Betty” – a loved one who is bewildered and fearful.

“Aunt Betty watches a whole generation of Americans deconstruct their American civic religion, and it freaks her out,” he said.

“I started to think, how can I actually bring Jesus into this person’s life, because they’re being sold a version of Jesus that’s not biblically accurate and will end up disappointing them,” did he declare.

He is particularly concerned about what he called “seeker-sensitive Christian nationalism” that seeks to attract new worshipers through worship services that praise Jesus and “own the libs” at the same time.

“I’ve been in this business long enough to know that if I got an American flag the size of a car dealership, put it in front of my building, and did a series of sermons ‘why biblical justice wouldn’t isn’t social justice, “I could get 1,000 people,” he said.

Rather than helping people deal with their anxieties about cultural change or focusing on people’s faith, Campbell argues, this strategy fuels anger by giving believers someone to blame for their problems.

This kind of scholarly-sensitive Christian nationalism has been on display over the past year at Freedom Night in America, a monthly revival and political rally hosted by Turning Point USA director Charlie Kirk in Dream City, a mega -Phoenix church not far from Campbell’s. congregation.

The Freedom Night services, which are carried by both Dream City and Turning Point, have featured Kirk and conservative figures like the writer Eric Metaxas, fox and friends host Peter Hegseth and John Coopersinger of the Christian group Skillet.

The events resemble a typical mega-church service, starting with some worship songs, followed by some announcements, an offering, and even an altar call. But instead of a sermon, there is a speech by Kirk, who is often joined by a guest.

At Freedom Night in OctoberDream City pastor Luke Barnett took the stage as the band wrapped up their set, repeating the last line with an old-fashioned worship tune, singing, “You alone are my heart’s desire and I want to adore you”. Barnett then introduced Kirk that night as a professor of religion rather than a conservative activist.

“If there is anyone that I believe God has raised up in America, to share life within the Kingdom, and what it looks like, what it can look like for our nation today, that is our guest tonight, Charlie Kirk,” he said. .

At the start, Kirk quoted Jeremiah 29:27, a popular Bible verse, giving it a new twist. The verse, addressed to the people of Israel during their captivity in Babylon, is often translated as “seek the welfare of the city where I have sent you into exile”, followed by a command to pray. For Kirk, the verse became a call to political action.

We rely on our readers to fund Sight’s work – become a funder today!

Joanna Kline, assistant professor of Old Testament at Gordon College in Massachusetts, questioned the accuracy of Kirk’s translation. On the one hand, he leaves aside the command to pray. It also lacked the original context of the verse, which was intended to tell the Israelites that they would be in exile for decades. This group of people also had no power to make demands.

“Who would they ask? she says.

A Turning Point USA spokesperson said Kirk sees himself as a lay Christian trying to do his part, rather than a pastor or religious leader. In this role, Kirk tries to involve his fellow Christians in shaping the wider culture.

It’s very different from Christian nationalism, the Turning Point spokesperson said, and has long been a Christian practice.

The spokesperson also said Kirk was concerned about the pandemic closures which affected many churches and, in Kirk’s mind, interfered with the right to worship. This showed him the need for political involvement of churches, because although churches stay out of politics, government officials do not leave churches alone.

“His main point is that churches should preach the gospel,” the spokesperson said. “His second point is to make sure churches are able to do that.” 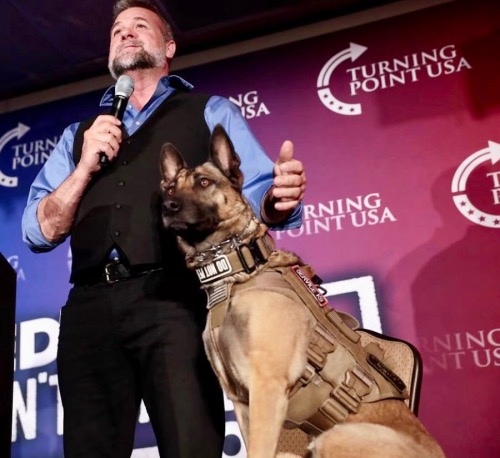 The author Victor Marx, who spoke at a Freedom Night in April, said holding an event to discuss politics in a church on a Wednesday night was very different from holding a discussion about politics on a Sunday morning.

A friend of Kirk who also spoke at a TPUSA event for pastors earlier this year as well as other conservative gatherings, Marx rejected the label of a Christian nationalist.

“To say that our country should be led in every position by Christians – that’s not what I believe,” he said.

For Campbell, his concerns about Christian nationalism have a personal side.

A former skinhead, Campbell first showed up at Desert Springs Bible Church in his early twenties, when he was asked to play drums in the band. The friendship and welcome he found at church changed his life, he said, and he let go of the hatred he had felt in his youth.

He eventually joined the church staff and in 2015 became senior pastor. At the time, the church was predominantly white and did not reflect the diversity of its community. Campbell began working to change that – building strong ties with black and Hispanic churches and working on issues like immigration.

Things went well at first. But Donald Trump’s election in 2016 and accompanying MAGA Christianity began to divide his church. People he had known for decades left to find a congregation that better suited their politics. Some of them ended up going to Freedom Night in Dream City – which led him to attend one of the services there and made him aware of the growth of Christian nationalism.

Campbell wants to help people like her former church members find a better way to live their faith.

Campbell is currently working on a book project inspired by the Alpha Program – a grassroots evangelism method centered on kindness, hospitality and conversation.

“It’s the Alpha program for Christian nationalists,” he said.

Dennae Pierre, a Phoenix pastor and executive director of the Surge Network, which helps churches of different ethnic backgrounds, thinks Campbell is onto something.

Pierre has worked closely with Campbell in the past and watched him lead his congregation through a difficult transition. Although many church members left, she said, Campbell’s congregation also attracted new people who felt ostracized by the merging of faith and politics in other churches.

She too believes that conversion rather than confrontation will help people find something better than Christian nationalism.

“When you think about Christian nationalism, I think there needs to be a process of intentional discipleship, to dismantle what is unhealthy and rebuild people with a more gospel-centered view of what it means to be a Christian,” he said. she declared.

This story was made possible through a grant from the Stiefel Foundation for Free Thought.