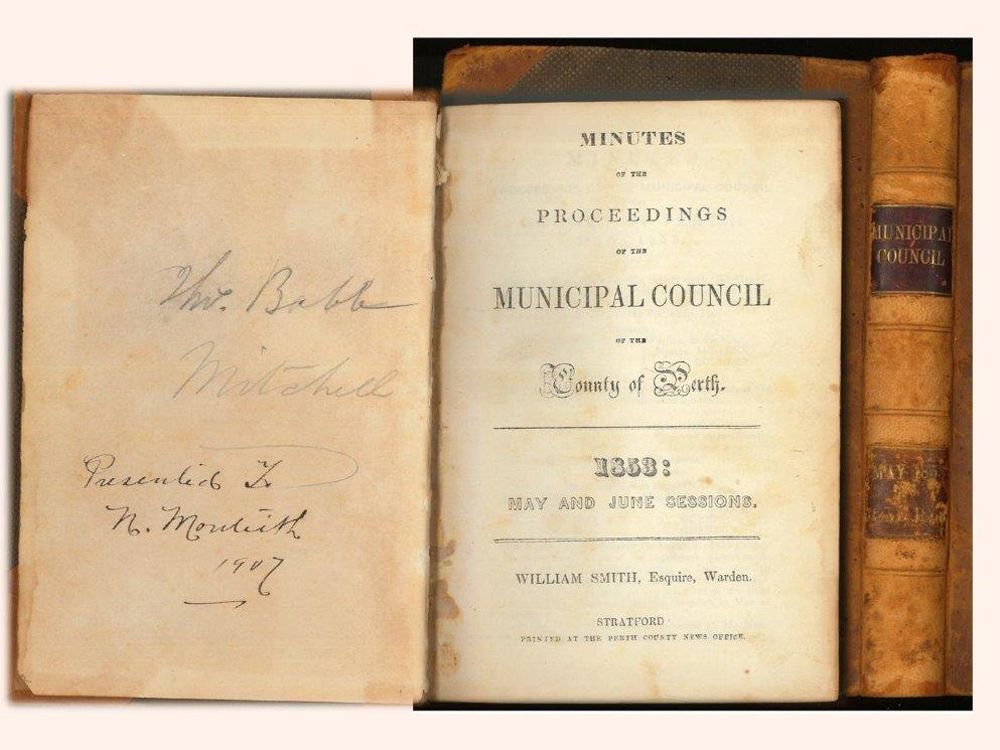 Reflections: A Valuable Set of Board Minutes

The Stratford-Perth Archives are celebrating a special anniversary this year!

Author of the article:

The Stratford-Perth Archives are celebrating a special anniversary this year! On January 13, 1972, work began on a project championed by the late Tom Orr and the Stratford Public Library to protect the Orr family’s collection of local history books, documents and photographs, as well as documents from Perth County Historical Collection Archives, and make it easily accessible to scholars. Both collections had grown since the early 1900s. Eventually, similar collections from across the county were added. Local governments transferred documents that were no longer needed for day-to-day work and have permanent value. After 50 years of operation, the Stratford-Perth Archives continue to house an ever-growing collection of documents which are carefully curated and made accessible to researchers around the world.

One of the ways we’re celebrating the archives’ golden anniversary is by highlighting 50 “treasures” from these collections in our weekly local history articles. By summer, we hope to be able to invite everyone to see them in person at our James Anderson Gallery. Although the staff has been discussing what treasures to display since early last year, we still haven’t fully decided what to include. Choosing 50 pieces from the thousands and thousands of archives is not easy!

This week’s treasure dates back to the first year of operation of the newly independent Perth County Council, which included representatives from rural townships and unincorporated villages like Stratford and St. Marys. Prior to 1853, the county was part of the District of Huron and the United Counties of Huron, Perth and Bruce.

This set of printed and bound minutes from the first five years of Perth County Council was donated to the Archives in 1987 by the family of Samuel Nelson Monteith (1862-1949). Monteith was MLA for Perth South from 1899 to 1908 and served as Minister of Agriculture. Before being elected to the provincial legislature, Monteith had served as a county reeve. A note inside the cover indicates that before the book was presented to him in 1907, it had belonged to Thomas (?) Babb of Mitchell. Obviously, it was preserved long before arriving at the archives 80 years later.

These council minutes show early, local democracy in action, and many of the decisions recorded still affect our lives today. In 1853 the council applied to the Canada Company for a grant at or near Stratford to build a county grammar school, permitted Mr. Linton to use a hall in the new county buildings for meetings of the directors of the institute of mechanics (precursor to a public library), and set up a sub-committee to report on the bridge being built over the River Thames at Mitchell. They also agreed “that the proceedings of the Perth County Council, at its various sittings during the year 1853, should be inserted in the Hamburg Beobachter (a German language journal) and that 100 copies should be published under pamphlet form.” Monteith’s copy was one of 100 such pamphlets printed in English in Stratford at the Perth County Press Office, which also included announcements of council discussions and decisions.

In a similar kind of treasure show at the New York Public Library, curators asked themselves, “What makes a particular object special? Is it its age, or its rarity? Its singularity or its beauty? Is it of great scientific importance? Does it provoke strong emotions? Is it a curiosity? Does it demonstrate the potential to improve the lives of future generations? Is there an amazing story it tells about how science works or the culture we live in? We invite you to ponder these questions as you read about our community’s treasures as we celebrate 50 years of local records in 2022.

The Stratford-Perth Archive is currently closed for in-person research. Phone and email service is available. We can be reached at 519-271-0531 ext. 259 or archives@perthcounty.ca.

Disney+’s “The Book of Boba Fett” soared, then crashed.