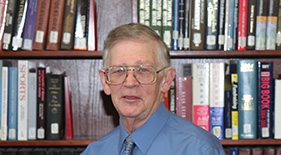 Gratitude should be more than just counting the blessings. It finds its true meaning in our ability to invoke this gratitude in the face of loss.

This year has given us many opportunities to test that ability.

Hundreds of years ago, harsh conditions along with sickness and hardship shaped and defined Thanksgiving, and like our ancestors, there should be gratitude in simply surviving as we mourn for our friends and family too. who did not. My friend, David Allen Nichols passed away recently. I try to follow my own advice.

I met David in 2004 when he was finishing a book detailing President Dwight Eisenhower’s little-known work promoting civil rights.

David told me that Ike knowingly refused to appoint segregationists to the federal bench. That anticipating Brown v. Topeka Board of Education before the Supreme Court, he named Earl Warren Chief Justice, pro-integration. That he sent troops to Little Rock to enforce Brown.

His book inspired my series of columns suggesting Wichita rename its airport to Eisenhower. This happened in 2014 after a brief public campaign by two radio celebrities. When one of them contacted me, I told them about David, who legitimized the effort.

David has consistently displayed a kind of humility and grace so common in the past but stifling in today’s selfie narcissism. He earned two master’s degrees and a doctorate, operated like a true Renaissance man, as his obituary said, but you would never know.

As his pastor Reverend Charles McKinzie said beautifully at David’s funeral in his home town of Winfield, after a conversation with David, David would leave knowing all about you while you would stand there realizing you almost don’t know nothing from him.

And there was a lot to know. David became a nationally recognized expert on the Eisenhower presidency.

His books, in addition to “A Matter of Justice: Eisenhower and the Beginning of the Civil Rights Revolution,” include “Eisenhower 1956: The President’s Year of Crisis” and Ike and “McCarthy: Dwight Eisenhower’s Secret Campaign Against Joseph McCarthy.”

He was a music teacher at school. He was playing the violin. He had served as a lay minister. He taught economics at Southwestern College where he chaired the university’s business program, overseeing the fundraising office during a major fundraising campaign. He spent 11 years as the school’s academic dean.

This loss is so great because he gave so much.

I found Grace, David’s wife, after the service. She gave me a long hug and then grabbed my hands and told me that every time she and David left Wichita they would see the Eisenhower airport exit sign and think of me. She said it meant a lot to them.

Well, he meant a lot to me and to most everyone who knew him. I will miss our conversations.

Reflecting on David’s life and counting the blessings of his friendship will be much easier.

He left me and his friends and family to mourn this loss, with so much to hold on to.

Mark McCormick was previously editor of the Journal.