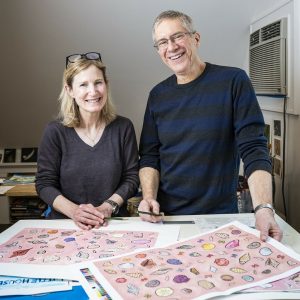 The lives and work of UW-Madison alumni Laura Dronzek and Kevin Henkes were recently featured in the Wisconsin Alumni Association’s On Wisconsin magazine.

The article, titled “A Storybook Romance,” describes how Dronzek and Henkes – who both graduated from the School of Education’s art department – met at UW-Madison, got married, and now “do magic together in children’s literature “.

Henkes graduated with a Bachelor of Arts from the Arts Department in 1983. He is described as a “superstar” in children’s literature and has won numerous awards for his solo creations, including a Caldecott Medal for “The Kitten’s First Full Moon. “, Newbery Honors for” Olive’s Ocean “ and “The Year of Billy Miller,” and in 2020 the Legacy Award for Children’s Literature, the article explains.

“The Legacy Award was a total surprise,” said Henkes of On Wisconsin. “My first thought was that I was too young to receive it, forgetting for the moment that I was 59 and had written 55 books. Knowing that I am on a list with, among others, EB White, Beverly Cleary, Maurice Sendak and Virginia Hamilton still gives me pause.

Likewise, Dronzek, the article explains, is “a force of nature in its own right.” After majoring in Psychology and English at UW-Madison for her undergraduate degree, Dronzek obtained a Masters in Painting from the Department of the Arts in 1993. She created illustrations for “White Is for Blueberry” by George Shannon, “Moonlight” by Helen V. Griffith. “It Is Night by Phyllis Rowand, and many other titles, and has built a successful career in the fine arts.

“The colors and lines in Laura’s illustrations are bold, but you feel calm when you look at them,” says Kathleen Horning, director of the School of Education’s Cooperative Children’s Book Center (CCBC). “She makes you feel like you are stepping into the world of a young child.”

Dronzek and Henkes also have an artistic partnership, including many successful collaborations. Like the words and illustrations in a bestselling picture book, the two artists brought out the best of each other in titles such as’ Winter Is Here ‘,’ Summer Song ‘and’ Birds ‘”, explains the article.

“Laura and I trust each other completely. She’s the first person to see everything I do, ”says Henkes. “It’s wonderful to have someone nearby who cares about you but can look at the work with a clear, cool eye. “

Check out the full article for more on Dronzek and Henkes’ remarkable marriage and partnership.

Storybook Island receives $50,000 for a playground for everyone | Local