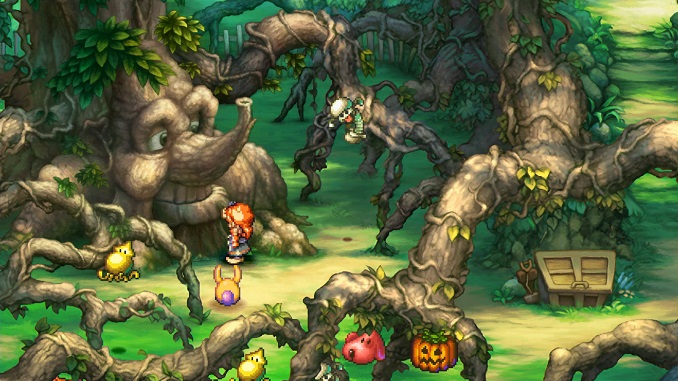 Legend of Mana and the storybook charm of nonlinear RPGs

legend of mana opens with a story about the burning of the Mana Tree over 900 years ago, which resulted in the entire world being compacted tightly into artifacts that preserved the last vestiges of the tree’s power. When you wake up, you’re home – a serene but otherwise empty cabin transformed into a tree front. There’s a Sproutling outside (something like a little grass fairy, but if fairies all shared a hive mind and wandered the land mumbling cryptic things about the world being an illusion) that gives you your first artifact, a set of children’s blocks that hold the memories of a trading outpost named Domina.

The Sproutlings firmly believe that the world is “fake” and that places and people only exist because we imagine them. The game’s artifact placement system seems to support this Cartesian view of Fa’Diel, unlike other Mana games, legend of mana is a completely non-linear experience where you wander from place to place looking for artifacts to place on the map. These artifacts are ancient items like forged lockets and tattered old dolls. When placed on the map, they twist and contort, sometimes summoning large splashes of flame or a legion of bubbles. It certainly implies that something magical is happening, that a great source of mana is released when you restore the world through this system.

However, everyone in the world seems to believe the Sproutlings are liars. For them, the world exists because they have explored it – they are people with rich histories and many stories to tell. They are also people who have bigger problems than wondering if the world is real or imaginary. Game progression usually takes you to place an artifact and then immediately become involved in a fairytale-like event that involves one or more players in the game. This is the main source of childlike wonder. legend of mana is famous for. For a moment, you are in a dump of abandoned toys, where you learn that they are actually former soldiers used in a proxy war hundreds of years ago by humans. The toys have grown bitter and cling to their pride as soldiers, but are slowly rotting from their lack of willpower. Right next to the junkyard, you can place Lake Kilma, where a legion of penguin pirates search for treasure but are slowly petrified by invisible fairies, which only you can see.

For most of the game, you act as a silent observer like this. You play the role of a recorder and can return home after each event ends to have your cactus write it down in a diary. Unlike many RPGs, the main character is decentralized and there is no real overarching story that allows the game to move around in a streamlined way. This is the type of game in which, without a guide, you can easily get lost. There are many different mechanics that are under-explained, such as blacksmithing, monster breeding, magic, and even leveling. Despite its sweet presentation, legend of mana is quite inaccessible by modern standards, and was even quite controversial when it was first released in 2000. play area referred to the game’s biggest downfall as an “overriding sense of fragmentation and isolation” fostered by the Artifact system, while GamePro derided the game as being “obscured by [an] overabundance of subplots.

I never played legend of mana when I was a kid, but the game strongly reminds me of some of my favorite gaming experiences. I immediately made comparisons with Final Fantasy: Crystal Chronicles because of the deep loneliness highlighted in Gamespot’s review, but that was more of an “in” for me than a turnoff. Crystal Chronicles has an equally sketchy plot that eventually comes to a true ending. The path to get there, however, is likely different for everyone. You experience moments and events at seemingly random intervals instead of a set timeline like with most mainstream RPGs, which is key to the storybook feel of both games. Yoko Shimomura’s score for legend of mana also tangentially reminded me how much I love Kumi Tanioka’s work on Crystal Chronicles; there’s a unique blend of fantasy, medieval influence, and darkness that both lends a delightful allure that makes the world feel lush and lively even when working on otherwise tedious tasks.

legend of mana also has echoes of SaGa border, Final Fantasy Tactics Advance and even Moon: Adventure RPG Remixed, with the open structure and occasional reliance on guides (or serious wanderlust) to find your next destination or find the solution to otherwise mercurial quests. These are all games that could probably never have a watershed moment in popular thought. There’s something about these unstructured narratives that fails to appeal to a large following, even among dedicated RPG fans. I partially understand it; I’ve been a lifelong fan of RPGs because they serve as an escape into another world, and I fell in love with the genre as a kid because I was on my own and viewed the characters in those games as my friends. But in legend of mana, you are mostly detached from the people around you. It’s not really your friends, apart from the twin wizards who decide to hang out with you. You are an almost invisible hero who, for all the inhabitants of Fa’Diel, has done nothing so heroic. They have no idea that you are recreating the world around them.

In a 1999 interview with Koichi Ishii and Hiroshi Takai, legend of manadirector and battle boss respectively, the two joke about being “contrarians” who “just [wanted] to make weapons all day. Their nonchalant approach to the sandbox ended up filling all of the CD-ROM’s memory, meaning it’s bigger in size and scale than even the following year. Wandering story. In the same interview, Ishii remarks on the large number of NPCs in the game, as well as the only restriction on character design: no one can just be a human. Simultaneously, the design eschews the polygonal character models that were in vogue at the time. The team opted for hand-drawn sprites, saying they remain the best way to elicit player “empathy”.

It all adds up to a rather beautiful game where the player and their actions are devalued outside of the path they choose to take to move from event to event. There can be a lot of menial stuff to do in the game, but you’re allowed to do it at your own pace (or not at all, if you’re not interested in monster farming or crafting) while absorbing all the stories around you. The artifact placement system feels like a world in stasis until you’re ready to dive into it; it reminds of volumes of short stories, which slept until you opened them. Your contribution is simply to be there for the ride. This is further underscored by the entirely missable Cactus Diaries, where the little cactus in your room records a chronicle of your adventures while embellishing its own thoughts about them. Going out of your way to get Li’l Cactus to write these entries makes them feel like more than just a recap – you see the game as a collection of little adventures with their own little themes and moralizing qualities.

Talk with Siliconera, the producer of legend of mana Remaster Masaru Oyamada noted that when the game was released, the internet was not as widespread as it is today. Fans have turned to flawed user-created strategy guides or friends in their immediate circle for answers on how to proceed. We’re losing some of that now that the solution to any roadblock is readily available, and the remaster further removes those invisible walls with a mode that partially or completely cancels combat encounters. Something is lost when one game becomes a brief pit stop on the way to the next one; we don’t have time to bask in its world as much as when we were younger and when the gaming industry wasn’t as bustling as it is now. legend of mana is ultimately a game about creativity, and solving its many little puzzles allows its players to adapt their own. I’d love to see more non-linear RPGs like this in the future, and I’d love to find the time and patience to really get it all figured out.


Austin Jones is a writer with eclectic media interests. You can chat with him about horror games, electronic music, Joanna Newsom and 80s-90s anime on Twitter @belfryfire