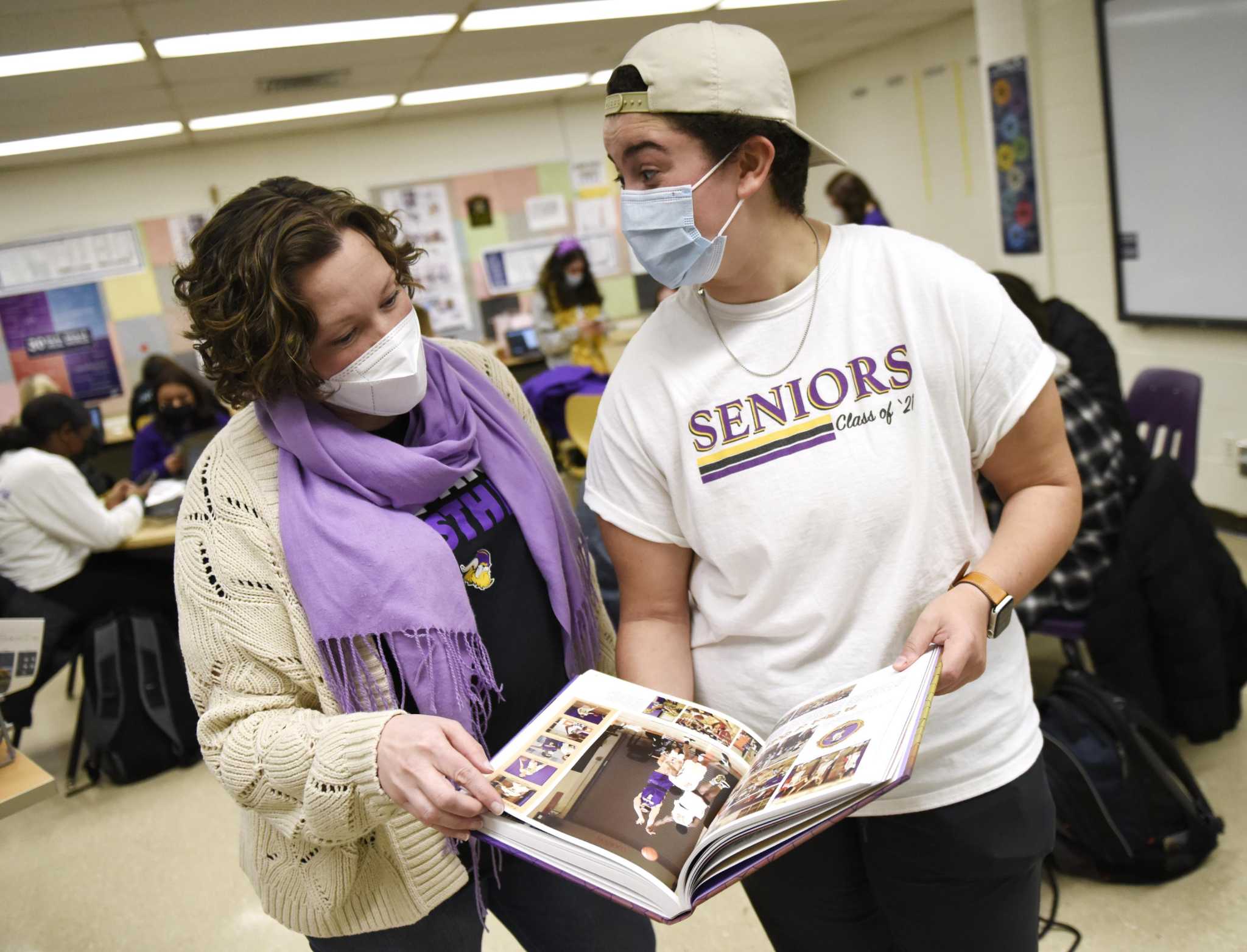 STAMFORD – “Fairy Tale” is probably not how most would describe the first full school year during the COVID-19 pandemic, but for students in the yearbook class at Westhill High School, those two words turned out to be a winning choice.

The 2020-21 classroom-produced yearbook was recently selected as one of the nation’s five “most outstanding high school yearbooks” by the American Scholastic Press Association.

When asked why the Westhill yearbook received this honor, pupils and teachers at the school were quick to point out the book’s theme and accompanying design.

Both were the brainchild of former student and one of the yearbook’s editors Lilah Steinberg, now a freshman at Wesleyan University.

Steinberg came up with the concept long before the onset of COVID-19. And when it came time to pick a theme — something yearbook classes decide each year — Steinberg fought for her idea.

It was not immediately adopted.

“At first people were worried it would be too girly,” Steinberg said.

There were also fears that choosing a whimsical theme would inadvertently trivialize the devastation of the pandemic, and that a fairy tale story would not sit well with a year dominated by the COVID-19 virus.

In the end, Steinberg succeeded.

Despite early concerns, the chosen theme of “Once Upon a Hill” ended up fitting in seamlessly with the trials and tribulations of the 2020-21 school year, reflecting the often dark and frightening obstacles the characters must overcome in the classic fairy tales.

“When you look at COVID, it’s almost like this monster,” Steinberg said. “In our yearbook, we had to overcome this monster and show that there was still good in the year.”

The colorful cover, which mimics the look of stained glass and includes an image of a Viking helmet wrapped in thorns, was straight from Steinberg’s vision. She drew the original on a sheet of paper, which she still has.

A photo of the finished product is currently framed in Steinberg’s dorm.

While Steinberg was assigned the concept for the book, many students worked to create the final version.

One of those students was Mia Labriola, now a freshman at American University in Washington, D.C.

Labriola said the school year was particularly difficult, as the pandemic meant there were strict protocols in place dictating proper social distancing and mask-wearing, and numerous events that were the focus of photos during the past years have been canceled or closed to outside visitors.

“You need yearbook photos,” Labriola said. “It became a challenge to have enough material to cover an entire year.”

One of the ways the staff solved the problem was to ask students and staff to submit photos, more than in all previous years. That meant even screenshots of Zoom calls made it into the book.

“We definitely had to think outside the box just to get content for this one,” she said.

For some of the students who worked on the book, like Labriola, the fairy tale theme was more than just a design choice. It helped them cope with a difficult and sometimes disheartening year by escaping into a fictional, magical version of the year they were experiencing.

“I really liked the idea of ​​doing a fairy tale theme,” Labriola said. “It brought back the magic of our high school experience that we missed.”

The fairy tale aesthetic is present throughout the book, from the ornamental frames that surround the photos and portraits of the elderly to the embellished and oversized fonts used to open the sections.

The look deviated from some previous yearbooks, which used a more traditional purple and yellow design, incorporating the school colors. And also, unlike other years, the theme is easily recognizable.

“We always joke that no one outside of the yearbook staff ever notices that the yearbook has a theme,” said Kate Tobin, the yearbook teacher. “It was much harder to ignore in last year’s book.”

Some pages of the book are dedicated to telling the school’s story through the pandemic. There are broadcasts focused on students’ favorite masks to wear, and another of students’ home setups for virtual learning.

For Debbie Alcantara senior, the yearbook’s current class editor, last year’s version was a way ‘to make students feel more together’ during a difficult year, she said. declared.

“I think years from now you’ll want to go back and read this,” Schwartz said.

“It was a nice touch to a sad year,” Piascik said.

Student response has also been overwhelmingly positive, with many raving about the book’s cover and appearance.

“People needed it,” Tobin said. “That really ended up being a big win for us, was seeing how excited people were.”