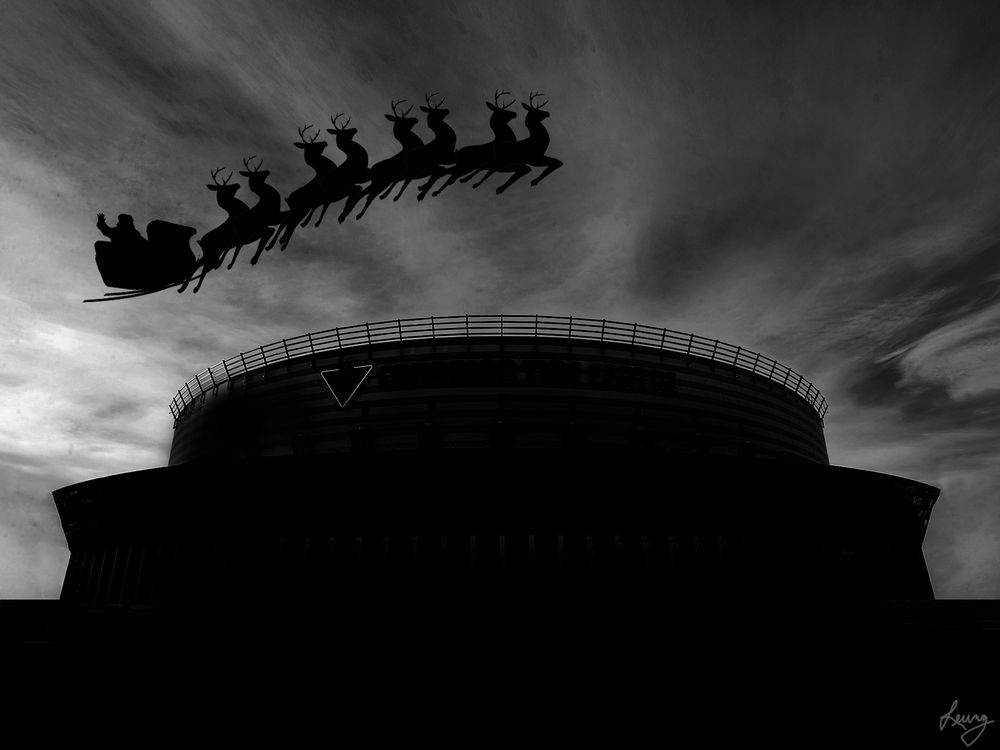 GARRIOCH: The Senators ‘version of’ Twas the Night Before Christmas

“It was Christmas Eve and throughout the Canadian Tire Center not a single creature was moving, not even the young players Chris Neil could mentor.

The Senators’ stockings were hung neatly by the fireplace in hopes that Santa would deliver a sold-out rink with more than 50% of the fans.

DJ Smith was tucked away, snug in his bed.

With visions of pulling off a winning streak and making the playoffs dance in his head.

And, Pierre Dorion in pajamas and Pierre McGuire in cap, had just moved in to see if they could take a little pre-game nap.

When on the lawn there was such a crash.

Dorion jumped out of bed to see if he could extend his contract with Josh Norris to settle this matter.

Far from the kiosk with books, Dorion flew like the Finnish flash, he opened the shutters and got ready to distribute the money.

The moon over the chest of freshly fallen snow gave the midday glow to the hockey equipment below when, to Dorion’s marveling eyes, what should appear but a miniature sled and eight building blocks top of the line.

“On Sanderson!” On Norris! On Batherson and On Formenton ”

So up to the top of the house the perspectives they stole,

With the sleigh full of toys, and a vaccinated Santa Claus too.

And then, in the twinkling of an eye, Dorion heard the cavorting and pawing of each little hoof on the roof.

As Dorion got into her head and turned around, Santa Claus jumped down from the fireplace.

His eyes, how they sparkled! Its dimples how gay!

Her funny little mouth was drawn up like a bow,

And the beard on his chin was white as snow.

He was chubby and plump, a true happy old elf, and Dorion laughed when he saw him, despite himself.

A wink and a twist of the head soon made Dorion realize that he had nothing to fear.

Santa didn’t say a word, but went straight to his job, handing out gifts to some of the good sports Senators:

Eugene Melnyk: The lifting of restrictions by the Ontario government as soon as this fifth wave of the pandemic is behind us and sold out on the rink. The worst days of this rebuild are behind this team and it’s easy to see the centerpieces are in place. It would take a miracle on 34th Street to qualify for the playoffs this spring, but it would be nice to get back into the mix.

Pierre Dorion: The heavy lifting has been done with Brady Tkachuk, Tim Stuetzle, Josh Norris, Thomas Chabot, Drake Batherson and Alex Formenton already in place, but the job of a GM is never done. Dorion is a good talent assessor and a strong start next year could be the start of the long playoff streak this team is craving.

DJ Smith: First and foremost, good health for the gentle trainer who stayed at an Ottawa hotel before Christmas after coming into contact with COVID-19. The players know what he wants every night and they try to deliver it. Smith and his team have done a good job of making sure everyone is on board. This will lead to more success.

Brady Tkachuk: A chance for the 10th captain in franchise history to lift the Stanley Cup over his head as soon as possible. Santa is supposed to make every dream come true and after signing a seven-year contract extension in the fall, there’s no one in Ottawa who doesn’t want to see Tkachuk lead the parade in front of Parliament Hill.

Thomas Chabot: A chance to live out his dream of playing for Team Canada at the 2026 Olympics. The Jolly Old Elf couldn’t make it to Beijing for the 2022 Winter Games due to the nasty pandemic, but maybe ‘one day we will all be together again. For now, Chabot can focus on success in the playoffs as he takes his game to another level.

Tim Stuetzle: The center of attention of this team for the success that awaits it. The move to place him center paid off early for the Senators and if the club can find the right fit on their wings, they will fly. Santa says Stuetzle has the skills to pay the bills and will be a force for years to come.

Josh Norris: It doesn’t look like Santa will be extending his contract this Christmas, but a deal will be made sooner or later. Looking at the club’s history with keeping the core together, there’s no doubt that Melnyk and Dorion want Norris here for the long haul. He is the gift we continue to give from Erik Karlsson’s trade with the San Jose Sharks.

Drake Batherson: A place on the Olympic team in 2026 would be a good idea, but since it’s still a long way off, Santa wants to focus on the Senators’ playoff appearance first. One of the most responsible kids in the locker room, Batherson is only scratching the surface of becoming a long-time regular and he deserves a trip to All-Star Weekend.

Matt Murray: Good health in 2022 and the chance to lead this team to a playoff spot later. He’s struggled to deliver the goods since being dealt with here in October 2020 by the Pittsburgh Penguins, but if you’ve met Murray before, you want him to be successful. He’s a good person and you hope he can get his game back on track.

Jake Sanderson: A strong leadership role with the United States team at the World Junior Championships in Edmonton and Red Deer starting on Boxing Day. Once the season is over, at the University of North Dakota, a one-way ticket to Ottawa will help the club end the season. He’s ready to play in the NHL and better to taste it this year.

Ridly Greig: A gold medal with Team Canada at the world junior tournament for the club’s No. 28 selection in the 2020 draft. He didn’t have the chance to play last year because he had COVID-19 just before the tournament and could not participate. Coach Dave Cameron expects Greig to play an important role in the tradition of the annual vacation.

THE READERS: A Merry Christmas, a Happy New Year and I hope that one day we will all be back to normal without having to wear a mask that hides the smiles on our faces. Be safe and healthy.

We encountered a problem while registering. Try Again