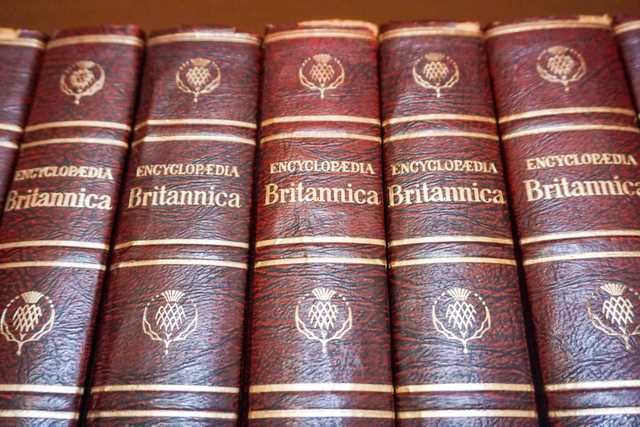 Encyclopedia Britannica: a relic that shaped interest in reading and research

Growing old can be such a wonderful experience if you allow yourself to think objectively and passionately. But you have to be able to laugh at yourself and marvel at some of the things you’ve done in the past, and in equal measure congratulate yourself on some of those brilliant flashes. It comes with a certain level of maturity and hindsight.

The more I look back into my past, the more I begin to realize that what I do in my old age, and take great pleasure in it if I may add, is not an accident, although it literally started by accident. .

In 1966 my father bought a complete set of the 11th Edition of Encyclopedia Britannica for our family home at Karugu Estate, a small coffee farm in Ruiru. It was a set of 20 volumes in burgundy color that seemed to fit very well with the furniture in the living room. Looking back, that’s when my interest in reading and research began.

While everyone was playing over the holidays, I delved into the volumes of the Encyclopedia Britannica in a quest for knowledge, especially about how things worked and those remote places of the world we hadn’t been told about. in the normal school curriculum. .

I also started reading magazines and periodicals such as National Geographic, Readers Digest, and Look and Learn. I enjoyed impressing my friends with the most off-the-beaten-path knowledge.

In an article published on February 2, 1911, Nature magazine described the Encyclopedia Britannica as “a dictionary of the arts, sciences, literature, and general information.”

The Encyclopedia Britannica is of Scottish birth. Its first edition appeared in 1771. Its interesting and rather turbulent history occupies about three pages of this (11th) edition, and shows its intimate connection to its native land until the reprint of the ninth edition published by The Times in 1898.

Under the same auspices the 11th volume supplement to the ninth edition was published, and with this edition formed the 10th, in 1902, and it is not little curious to observe that the impression created by this issue seems to have been so strong that few realize straight away that this edition has taken eight years to prepare.

Its preparation continued to be carried out from the Times office until 1909, when publication rights were taken over by Cambridge University Press, a measure generally recognized as being particularly appropriate to the character of the work.

It is proposed in this general notice to consider some of the most notable features of the work, as they distinguish it from previous editions and other reference works. The fact that it possesses such characteristics cannot be doubted; the new edition shows more than just confidence in the traditional form.

The first edition was in 100 weekly parts, which ultimately took three years to produce, and when completed in 1771 consisted of three volumes. The preface to the first edition, the observation of which is still valid today, was “Utility must be the principle of all publication”.

Modern science and Scottish identity were the two themes of the first edition. Articles were sometimes a bit long, often exceeding 100 pages. By the second edition Britannica was published in 10 volumes, by the third in 18 volumes, and in 20 volumes after that.

In March 2012, the world learned that the publishers of the Encyclopedia Britannica would stop producing hardcover copies of their venerable reference.

The company continued to publish online, selling its products to individuals, schools and libraries. In some ways, this was good because the web is much easier to update, more interactive, and can deliver motion, sound, and color simultaneously. In other ways, it’s not that good, especially for young readers, the elderly, immigrants, and tech-savvy people who prefer to read a book.

Britannica’s decision was in many ways a milestone on the path to the new world of the 21st century. In the mid-20th century, a set of Britannicas on the shelf was a status symbol: a sign that the family had money, taste, a claim to intelligence, or at least a very strong desire for ‘to be seen that way. Other families had the World Book, the Necklaces or the Encyclopedia America and the annual directories.

Wikipedia has largely replaced these printed volumes, mainly because it is free. That it is not written, edited or controlled by content experts seems to be of little concern. Crowdsourcing has replaced pundits, and while not good, Wikipedia’s accuracy quotient appears to be improving.

We now have to live with the idea that all knowledge is available at the click of a button. However, eagerly awaiting the world our children and their children will live in doesn’t simply mean abandoning seemingly anachronistic technology. It’s about preserving the best of what we know and making it accessible to everyone.

I believe this burgundy hardcover Encyclopedia Britannica set is somewhere in our family archives!