The park – at the corner of Garvey Avenue and Ash Street – is across from the Town Hall where he served and the Elsmere Fire Hall he helped form.

“Billy Bradford served the people of Elsmere for decades, truly dedicated and devoted to the community he loved,” said Elsmere Mayor Marty Lenhof. “Billy Bradford Park will forever honor a respected and admired leader who broke racial barriers while serving the public with dignity, respect and selflessness.”

Born in Covington and raised on a tobacco farm in Boone County, Bradford, 86, continues to live in the town he served. As a member of Elsmere City Council, he was known as a humble, easy-going but focused leader who knew how to get things done.

“As a Boone County farm boy,” Bradford said in The Encyclopedia of Northern Kentucky, “I never imagined a life in politics. I have always enjoyed helping people.

Bradford’s dedication to leadership was forged in the early 1960s as a steward of the church at Barnes Temple AME Church in Elsmere, where he began to admire civil rights leader Dr Martin Luther King. In 1964, Bradford had the honor of meeting Dr. King at an AME church convention in Cincinnati, according to the Encyclopedia of Northern Kentucky.

A decade later, Mayor Bradford became the first African American elected to Elsmere City Council, serving until 1980, then returning to council in 1982. He became vice-mayor in 1994 and in 1998 was elected first African-American mayor of Elsmere and northern Kentucky, serving in that office for 12 years. 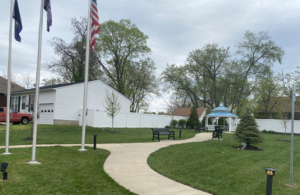 “More importantly, however,” writes The Encyclopedia of Northern Kentucky, “Mayor Bradford has proclaimed that his spirituality, dedicated staff and hardworking city council are the primary reasons for his success as mayor. He is also proud to have been able to help create a community where (all races) can work and live together harmoniously.

Never one to seek the spotlight, Bradford put a spotlight on others when he was honored as a community hero by the First Baptist Church in Elsmere in 2010.

“I work with great people who make my job a lot easier,” Bradford said. The Erlanger recorder. “I’m certainly honored to be recognized, but it’s a team effort here, and everyone deserves to be recognized.”

Alexandria’s birthday celebration is on!