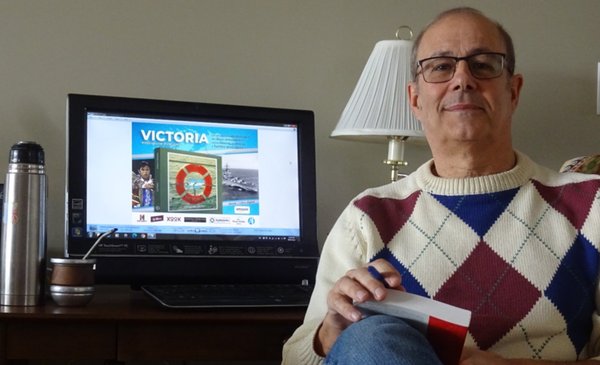 Canada, Bahia and Malvinas, united in a storybook

Born in our city 70 years ago, Guillermo Panulos has spent his entire life as a writer outside the country.

In Canada (where he lives with his family in Alistair, Ontario) since 1978, the proximity of the 40-year-old war in the Falklands pushes him to write his new work: “Victoria”, a storybook already on sale in bookstores in Bahia Blanca.

“This work is a humble tribute to all Argentine fighters and, in particular, to the members of General ARA Belgrano Cruz’s team,” said Don Bosco, a former student of the school and later a university lawyer. Buenos Aires.

Guillermo, founder and director of the International Language Center of Canada, is currently a board member of Realcap Holdings Ltd. in Toronto and translator for the Network of Progressive International Translators.

“It’s the first time I’ve published a book with my own stories. Most of my previous work has been compiled. Victoria took a lot of time for me and I learned a lot during that time,” he said.

Carlos Bellardinelli, a plastic artist from Bahia, designed the cover of the book, which was published in our country – on paper and in digital format – by the publisher Autores de Argentina.

“Beyond the distance, Bahia is very present at work. There is even an excerpt of five stories entitled “Relatos Bahienses”; this is where I showcase my childhood memories in the city,” he said.

As he said, there are many references to the first period of the Don Bosco school; His experiences of youth and summer in Monte Hermoso.

“Although many in my generation appear in disguise, there are places and characters that are recognizable. Some of the stories are dedicated to notable and beloved Bahians, for example the story of “El Sable” pays homage to Dr Mario Serrano, who was delighted to meet him and I shared special moments with him”.

Another story is to pay homage to his maternal grandparents in a Bahia Blanca at the beginning of the 20th century.

“There are also places that reflect the characters I’ve met in different countries and some of the stories are tagged with original people, while others are generally Canadian in urban or rural settings,” he said. -he adds.

–How did you come up with the idea of ​​Victoria?

–Catalyst is the story a friend told me a few days ago when I visited Bahia Blanca a few years ago. Sergio Canulo, an officer on the ARA General Belgrano cruise ship, told me directly about his experiences during the dramatic moments when the torpedoes hit the ship. South Atlantic..

“Then I added a creative piece to the story that weaves in other stories and other characters.”

It should be clarified that Victoria is not a naval journal, but instead Guillermo tries to preserve the strong unity of the entire fleet at an exceptionally dramatic time.

“Victoria is the most important story in a collection of twenty-five stories from the book of the same name,” he said.

– How did you personally experience the Falklands War?

– Surprisingly. I can say that one of my stories in the book Victoria is a self-reference as it unveils the fears, emotions, confusions and thoughts of a young Argentinian student in Canada during the 1982 war.

“I tried to ensure that the message of Victoria’s story reflects the theme of John Lennon’s image and the meaning of a string quoted in the book. The quote is important, especially when you see the most tragic conflict in Eastern Europe. Victoria’s story, in the final analysis, pretends to be an ointment.

–I am going to Bahia because I have very dear family and friends. As often happens to many of us, I see the city disappearing from that Bahia Blanca that existed in the early sixties. I feel lucky to have enjoyed the simple things like the fish or ice cream parlors in the street, the sharpener with his flute, the little train to Calvan Spa and the endless Saturday movies at the Union Ferrovier theatre. I briefly reflected on this in some of my stories in the Victoria book.

“A few years ago, Dr. Margarita Feliciano, director of the Andres publishing house in Toronto, suggested that I start writing. I had no inspiration to write because I didn’t know what to write at the time. Thinking it would be nice to share, that’s how my first story was born, which I include in the book called “About the Viceroy and Other Herbs”.

He wrote other short stories, which were published in various collections of York University, Glendon College, Andres Publishing House, Canada.

Prior to its publication, some works were read at literary or patriotic events, such as the celebrations of the bicentenary of the Declaration of Independence in the presence of officials from the Argentine Embassy. Over the past ten years, he has written 33 books.

Young Eduardo Sosa is ready for emergency surgery in an operating room. In London, Mrs. McCormack is about to celebrate her husband’s birthday. Two events thousands of miles apart and socially unrelated drive the story, which ultimately reveals the close relationship of its protagonists. In the story of “Victoria”, the humanity, courage and innocence of the characters help to soothe the deep sadness caused by the war and suggest the epic of a new hope.

The Victoria book is available in the Don Quijote, Henry and XOOK bookstores in our city.

Spotlight on Indie Games: The Choice is Yours