The Independent Walt Disney World Encyclopedia, Volume 1: Magic Kingdom by Kevin Yee and George Taylor is a comprehensive and comprehensive list of attractions, restaurants, shops and other points of interest in Walt Disney’s Magic Kingdom theme park World. The book contains over 400 information entries that cover the 50-year history of the theme park. I was sent a copy of the authors, and I could not let go.

Read on to see how you could win a copy of the book! Although the book is, as the title suggests, an independent business not officially endorsed by The Walt Disney Company, you would think it was written by a team of archivists employed by Disney. After I finished the first page of entries, I could tell that Kevin and George’s research was meticulous. Sources they referred to while writing the book include park guide maps, official books, the Walt Disney World website, D23 (the official Disney fan club), and a number of others.

With over 50 years of history to cover, this book was no small feat. But their work paid off. This book is packed with information, some of which, even the most expert of Walt Disney World fanatics, might not know. The book is full of anecdotes and fun facts. For example, I had no idea that Barnstormer at Goofy’s Wiseacre Farm – the kid-friendly coaster that opened in 1996 – replaced a petting zoo, Grandma Duck’s Petting Farm. As a fan of adaptive reuse, I loved that the kid’s farm barn was integrated into the Barnstormer driving experience.

The book made me dream of the magic kingdom of years gone by. To celebrate Walt Disney World’s 25th anniversary, Cinderella’s Castle has been painted and decorated to resemble a giant birthday cake. 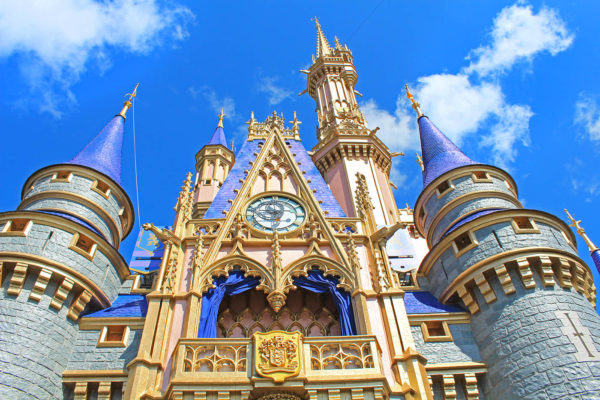 The whimsical retheme might seem a bit wacky compared to the 50th anniversary castle, but it was nonetheless a mind-blowing sight to see – and one we’ll likely never see again. While most of the book’s entries are relatively short, others – for some of the theme park’s more iconic attractions – are longer and more detailed. This was certainly the case with the old Snow White’s Scary Adventures attraction, which opened with the park in 1971 and closed in 2012 to make way for the new and improved Fantasyland. The book covers entire lands as well, giving readers an insightful yet concise look at areas like Mickey’s Toontown Fair, which also closed to make way for New Fantasyland. I learned that this was the only land to be built after Magic Kingdom opened – and the only one to be removed from the park entirely.

The book is perfect to read before or after your next trip to Walt Disney World – or if you’re just curious about what all Magic Kingdom has to offer (spoiler: that’s a lot).

If you’re a Walt Disney World veteran, this reading will be a trip down memory lane, even if you’re almost guaranteed to learn something you didn’t know before. If you’ve only been to the park once or twice, you’ll want to go back to see all the things you missed.

If the book seems overwhelming, don’t worry. It ends with a full index, so it’s easy to find entries on a specific ride or attraction.

For a chance to win your own copy of The Independent Walt Disney World Encyclopedia Vol 1: Magic Kingdom, leave a comment below with your favorite Magic Kingdom attraction, past or present (even if you haven’t ridden it or seen in person). We will randomly select a winner to receive a copy of the book.

We would like to thank Kevin and George for sharing their book with us. We can’t wait to read the next volumes of the Independent Walt Disney World Encyclopedia!