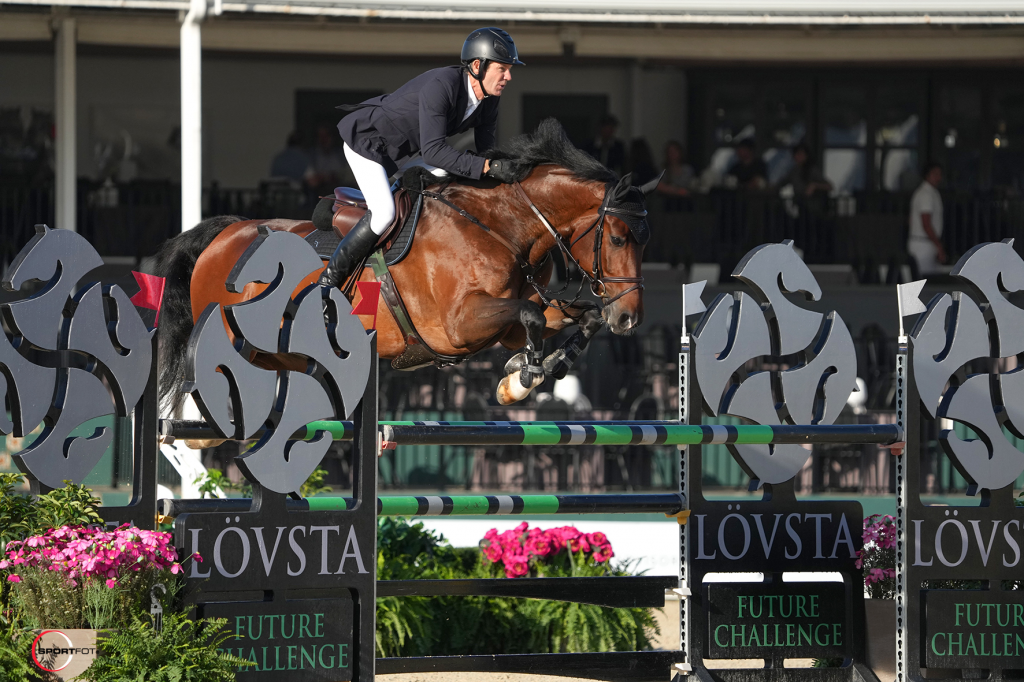 Wellington, Florida – March 18, 2022 – Another scenic morning at the Palm Beach International Equestrian Center (PBIEC) set the stage for a day full of competition during the Horse goods Ireland-sponsored Week 10 of the Winter Equestrian Festival (WEF) 2022. Along with its four-star FEI-rated show jumping classes and variety of national divisions, the week featured the rising stars of show jumping. The five-, six- and seven-year-old future stars took center stage throughout the week in the international arena ahead of the Developing Jumper series finale held on Friday, March 18. Lövsta Future Challenge 7-Year-Old Developing Jumper Series Classic kicked off the busy day with a victory for Beat Mändli (SUI) and Cinderella 770.

Forty-five of the best young horses in the sport gave their best against the opening ring of Michel Vaillancourt (CAN) in the hope of qualifying for the first prize jump-off. Vaillancourt challenged them with several wide oxers and a triple combination that proved tricky for many. Still, an impressive total of 16 rider-horse combinations eventually qualified for short track. The field had representatives from nine individual nations in the play-off. The group was fast from the start, and the lead changed hands several times before settling with Mändli, who stopped the clocks in 30.942 seconds.

“Today we had a very fast jump-off and a big one,” explained Mändli. “I was at the start of the back order, but she had given me a good feeling in the first round, so I just gave my best shot.”

Bringing the young mare to this WEF season was not originally in Mändli’s plans, but he now feels it has benefited him.

“The plan wasn’t originally to bring her in, but I was a bit short on horses when I came here and had an extra stall, so I thought why not and I shipped from Europe,” he said. “I just wanted to play with her a bit, but she’s had a great season so far with a handful of double clears and then obviously winning the final today. I didn’t really have a plan for the dam; I just rolled as cleanly and as fast as I could on the floor without pushing her too hard.

There were 24 combination six-year-olds as the day’s second class. Vaillancourt structured the $15,000 North Star 6-Year-Old Developing Jumper Series Classic as an immediate play-off where all pairs that emerged clear in the first round were then given the countdown and invited to their short track. Nine participants managed to double clear in the time allowed, but none could beat the speed of Pablo C driven by Charlotte Jacobs (USA).

“We brought him in from Barnadown Show Jumping in Ireland after following his career throughout the summer,” Jacobs described. “He’s incredibly easy, fun and safe. He is everything you would want in a show jumper.

While having all the positive attributes, Jacobs explained that he is a bit bigger and slower than some of the other mounts. She went on to describe the move she made in the play-off that she says paid off the most.

“I had to get a little creative in the jump-off, so I actually jumped a bush that was between water and another jump to make up some time,” she said.

Pablo C also received the Champion Equine Insurance Jumper Style Award, presented by Laura Fetterman, for his successful round with Jacobs in the class.

Matthew Boddy (GBR) swung to second place with Gotham Enterprizes, LLC SBS mare Rockette (Cool As Well x Liatos) adding just nearly a second to Jacobs’ time to finish clear on the fences in a time of 32.464 seconds. David O’Brien (IRL) put Ireland on a gallop to victory by posting the third fastest time in the jump-off with Headley’s Kinetic, owned by Leap Year, LLC. O’Brien stopped the times at 33.296 seconds with the mare Warmblood (Kannan x Clinton).

The duo was one of five clear doubles in the field of 13, and their fast time of 31.832 seconds was enough to secure them first place.

“She’s inexperienced but she’s very cautious,” Gallagher said of the North Star-owned youngster. “It’s easy to be fast when you know the horse isn’t going to knock down the jumps.”

Montana’s performance marked the second win of the day for North Star, with Charlotte Jacobs also taking first place in the 6-year-old category. Gallagher pointed out that Montana is the one who has been with North Star since the beginning, while his partnership with the mare is new.

“I only started riding her a few months ago here; we are helping Charlotte to be her young horse,” Gallagher said. “They bought her as a colt and have produced her so far. She’s improved every week, so it’s exciting to do with her.

The developing series of jumps presents a learning opportunity for horses to compete against their peers.

“[This series] is brilliant,” noted Gallagher. “You can jump in the best rings, the courses are nice and they are not too difficult. You can easily bring a young horse.

Second place in the classic went to Bianca La Fontaine (CAN) with Mister Diamant VG owned by South Shore Farm, and third to Tyson Fury, owned and ridden by Laura Chapot (USA).