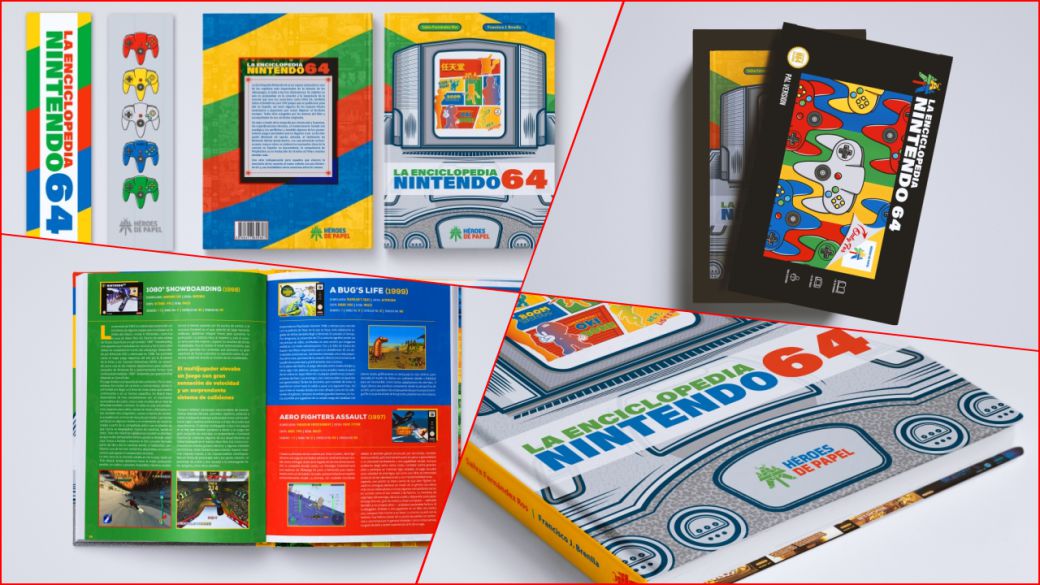 Announcement of “The Nintendo 64 Encyclopedia”, the new Paper Heroes book

The publisher Héroes de Papel has formalized one of its major premieres this year: The Nintendo 64 Encyclopedia. Dedicated to the unforgettable home console of the Japanese firm, this book looks back on the complete life of the machine with its most outstanding works. Salvador Fernandez Rosjournalist and editorial coordinator of MeriStation, alongside Francisco J. Brenllaa collaborator of this same house, signs a manuscript produced from an in-depth investigation which a video game library is required to remember.

Defined as “an exhaustive review” of a fundamental period for the electronic leisure sector, such as the jump in three dimensions, The Nintendo 64 Encyclopedia discusses not only the creation of the machine, but the trajectory of the fourth console in the Kyoto company’s history, originally released on June 23, 1996.

What we once knew as Ultra 64 is translated in this essay as approximately 250 reviews of some of the most representative Nintendo 64 video games with publication in Spain; although a space is also dedicated to these unpublished works here which have only seen the light of day in North America and the land of the rising sun. All titles included have been re-enacted by the authors and come with their original color covers.

The book includes only aan interview with insider Nintendo Ibérica testimonials, a meeting in which the most important moments of the console in Spain are told; from its release to the non-translation of The Legend of Zelda: Ocarina of Time, competition with PlayStation, etc. “A journey through market and press reception, technical specs, the revolutionary analog controller, peripherals and also some promising canceled games that never saw the light of day.

The Nintendo 64 Encyclopedia opens for pre-orders today, June 23, 2021with the aim of reaching the shelves of bookstores and department stores this September 21 in two editions. One of them, standard, published in hardcover and in color; the other, in a special limited edition, will be sold until June 30 only on the Heroes de Papel site for silver and gold members of your community. From this date, access will be given to everyone while supplies last. Said special edition will include the book; a box with an exclusive design and luxury finish; a set of seven cards with the major milestones of this Nintendo console; a keychain of the iconic Nintendo 64 controller; a certificate; and a bookmark.

Inside of The Nintendo 64 Encyclopedia

Salvador Fernández, on the occasion of the announcement, maintains that it is “a book designed for those who want to know the whole history of the console and its games, from its conception to its decline. And naturally a trip to the past that those who have had it will particularly appreciate”.

The creative rationale for both authors when undertaking this editorial project goes back to their experience, memories, and affection for the Nintendo 64. Its historical value in the industry is what eventually got them started writing and coinciding with the year of their production. twenty-five years since its arrival in stores.

“The Nintendo 64 was a revolutionary consolewhich marked the way forward in 3D games and established mechanics and ideas that we consider common today,” says Fernàndez.

Each book is aimed at a type of reader. In this case, the couple considers that “Any Nintendo 64 fan should fall in love with a book like this: full of details, both in terms of content and design, and full of data, secrets and anecdotes that will bring back to life a very beautiful era of video games. If they had N64, they will be featured in commercials, games, and moments. Of course,” he finished.

Luke Williams’ storybook journey continues in front of his family