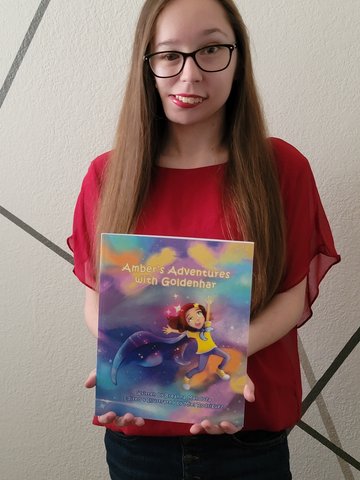 Breanna Mendoza’s story of overcoming adversity has been well documented. In 2015, she was forced out of college after being bullied for her facial deformities due to Goldenhar Syndrome. Since then, Mendoza has attended the Huntington Learning Center and graduated from Turlock Christian High School and used her education to become a published author.

Just over a month ago, Mendoza released Amber’s Adventures with Goldenhar, a children’s book that reflects some of her real-life experiences while living with the rare syndrome.

“The book is about my life with Goldenhar Syndrome and an adventure of going to the hospital and having surgery,” she said.

Mendoza explained that his inspiration for writing a book was to show that whatever things some people may have to face in life, they can break through and use those obstacles to spread positivity to others. This is also the reasoning behind his “Be a Light” movement.

“The main goal was to start the ‘Be a Light’ movement,” she said. “I know for me, one thing that I thought about after being bullied was how could i show people how to be treated the way i want to be treated i came up with the idea for Be a Light because being a light in a dark world is important… after all that has happened in my life , I want to show people that there is a light at the end of the tunnel.

Her father, Miguel, is her manager and has spoken about the importance of letting Breanna tell her story.

“She was always a bit of a writer. For her to take her life and put it in a book is awesome,” he said. “Not only do we want to spread the message of being a light, but we also want to raise awareness that not everyone is the same. People are different, but you are beautiful, you are gorgeous and no matter what ‘one says… We may be different but we are all the same.

Breanna explained that as a lover of books and reading, writing one of her own was something she had wanted to do for a while. She explained that writing Amber’s Adventures with Goldenhar took a few months, but the illustration and publishing process took nearly a year. She worked alongside artist Tracy Miel Rodriguez, whom she discovered by noticing the artwork in her orthodontist’s office. They eventually got in touch and the rest was history.

“Miel just said whatever I wanted, she would make it happen,” Breanna said. “She gave me several options, we talked about different things, different colors and we ended up doing it all.”

Miguel explained that although this book only covers Breanna’s adventures regarding surgery, she plans to turn the book into a series to cover her experiences with the more than 20 other surgeries she has had to undergo in her life. .

“She’s had over 20 surgeries and is going to cover different things from that time as well as growing up with her two brothers and her parents, me and her mom,” Miguel explained. “I don’t know what she’s going to include in future books, but the word adventure is there for a reason. Life is an adventure.”

Breanna will have another adventure when she hosts a book signing at Lightly Used Books in Turlock on June 25th. She explained that she had formed a solid relationship with owner Jenni Brannon, who offered to have a signing session in the shop.

“Me and my dad were thinking and we just decided, ‘Hey, why don’t we try a book signing?’ We ended up talking to Jenni and she offered to have a pop-up,” Breanna explained.

The book signing will take place from 10 a.m. to 3 p.m. and will also give customers the option to purchase the book in person.

For those unable to attend the book signing, they can purchase a copy by going to Breanna’s new website, wwwBreannaMendoza.com, and clicking on the “Buy Now” tab to be directed to the listing. books on Amazon.