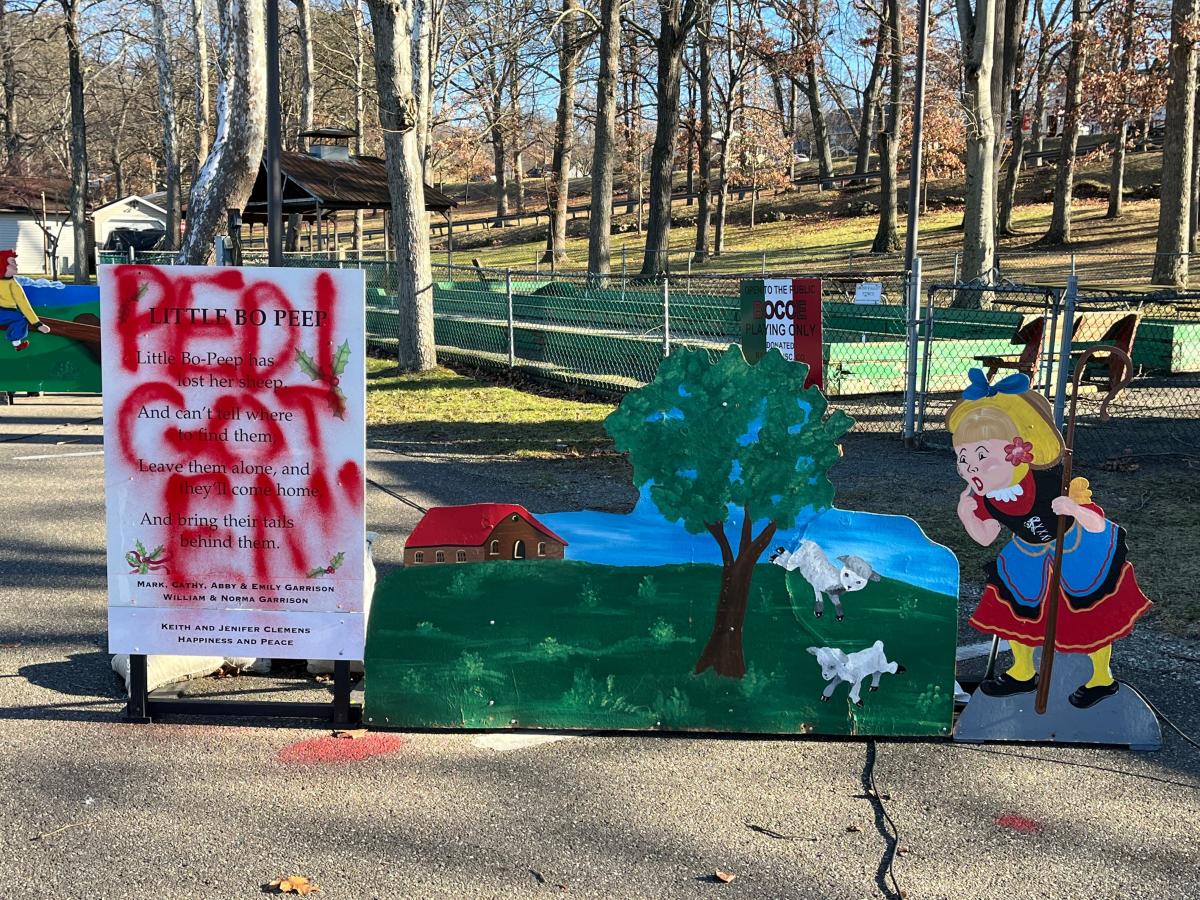 NEW PHILADELPHIA — For the first time ever, New Philadelphia’s Storybook Lane Christmas exhibit has been targeted by vandals.

A suspect is in custody.

“These clean up, thankfully, with a lot of labor,” said New Philadelphia Rotary’s president Tom Police. Storybook The Lane project was announced on Monday as workers cleaned paint from panels in the park’s maintenance garage.

“Four of the screens are going to have to have the mechanisms rebuilt as they were all bent. Apparently the person tried to take them apart and in the process bent all the mechanical parts. So we have a lot of bent parts that need to be replaced. ‘next year.”

In a related incident, police were called to a Fifth Street NE residence on Monday morning.

According to police reports, a man called to say he was asleep when his daughter broke the glass in the back door window and broke into the residence. He told the police he wanted her there.

The girl was arrested for burglary and later admitted she spray-painted the Storybook Lane signs, police said.

Mayor Joel Day said he was shocked when he heard the news.

“It’s somewhat unexpected in our community, but whoever did it will bear full responsibility,” he said. “There’s just no call for that kind of vandalism or vandalism of any kind. But desecrating Storybook Lane, I don’t know, is pretty bad.”

He said law enforcement did a good job on the case, noting that when they heard what happened, they had a suspect in mind.

The city is in the process of installing surveillance cameras in Tuscora Park, but Day said that was in the works before this case of vandalism. The work should be completed by this spring.

He applauded the reaction of residents when they heard the news of the vandalism.

“The outpouring of the community to volunteer to pay for her repair and to make things right has just been phenomenal. It really is,” Day said.

“We’ve learned to expect that from our community. Whenever we have a need, the community responds. That’s exactly what we do in New Philadelphia and Tuscarawas County.”

Storybook Lane’s origins date back to the mid-1950s when Vic Marsh, a prominent local businessman and his neighbors along E. High Avenue in New Philadelphia built and displayed the famous nursery rhyme characters each Christmas season. The exhibit was moved to Tuscora Park in the 1970s.

Marsh’s daughter, Ellie Kirk, asked the New Philadelphia Rotary Club to undertake the much-needed restoration of Storybook Lane in 1993. Since then, Storybook Lane has been a club project.

Tom Police said the holiday exhibit had never been vandalized before, although high winds blew part of it over the weekend.

“It’s the worst thing that has ever happened and we hope it never happens,” he said.

A Go Fund Me account has been opened to help finance the repairs. It can be found at https://www.gofundme.com/f/help-restore-the-magic-of-story-book-lane?qid=402381fa2e39cea6ab7dd7086b016b50

This article originally appeared on The Times-Reporter: A vandal targets Storybook Lane in Tuscora Park