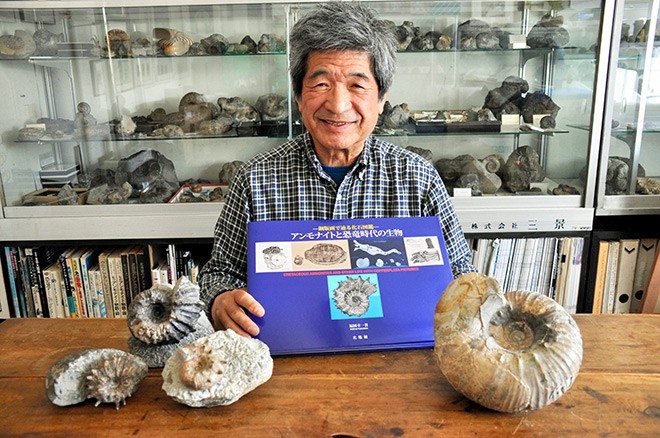 A Hokkaido Artist’s Passion for Ammonites Leads to an Encyclopedia

Koichi Fukuoka’s career as a copperplate engraver took an unexpected turn after he encountered fossils of ammonites, a spiral-shelled creature that lived in the age of dinosaurs.

The artist, who lives in Hokkaido, changed his subjects from local landscapes to a wide variety of ammonites found on Japan’s northernmost main island.

Fukuoka, 75, has finally released an illustrated encyclopedia that details more than 300 fossils of ammonites and other prehistoric creatures found on the island.

It features copperplate images he has produced over the past 20 years, including ammonites in four suborders, 36 families, and 181 genera.

“Ammonites are so beautiful. As living beings, their forms were functional in every way,” he said. “It’s my job as a painter to show people that such fantastic fossils are found in Japan.”

Ammonites, belonging to the same group as squids and octopuses, thrived in the oceans before disappearing with the dinosaurs 65 million years ago during the Cretaceous period.

Hokkaido is one of the richest sites in the world in ammonite fossils. Over 500 species have been discovered and new varieties continue to be found.

Fukuoka became captivated with ammonites after finding an ammonite fossil with fossil enthusiasts in Hokkaido.

In addition to the well-known varieties with snail-like swirls, ammonites come in different forms. The genus Nipponites, characterized by irregular whorls, appears to be a wavy snake.

The more Fukuoka learned about ammonites, the more hypnotized he became.

Around 2001, the artist stopped working on the landscapes of Hokkaido to focus on ammonites. His copperplate images capture the detailed taxonomic characteristics of each variety.

“I never thought I would be working on ammonites for so long,” he said.

Fukuoka began compiling his works into an encyclopedia five years ago.

Although it took much longer than originally planned due to the novel coronavirus pandemic, the book was eventually completed with the help of paleontology experts.

“Looking at the artworks in Fukuoka, I feel the urge that we researchers want to express our feelings for fossils more strongly,” said Makoto Manabe, deputy director of the Tokyo National Museum of Nature and Science. . “I think you can find something new when you look at the fossils again after seeing his works.”